As St. Vincent, Annie Clark has released five solo albums and worn as many faces as there are people in the streets. In her most recent role, she presents the closest yet seen to self-portrait: a disaffected, disillusioned, and deeply lonely pop idol. She finds a freedom, perhaps, to be just Annie — and everyone else Annie has been. Therefore, her “Fear the Future” tour, which visited Stage AE January 9th, is not just a campaign to promote MASSEDUCTION, but a celebration of her entire career. 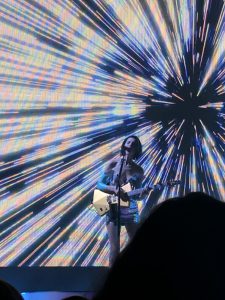 The show is in two halves. The first opens with “Marry Me” (the titular track of her first album) and concludes in her smash hit “Birth In Reverse”. Along the way, we take a winding trip through her best work in chronological order of writing. Moving across the stage from left to right, and backdropped in shifting colors and pulsing lights, St. Vincent transforms and evolves across her past 11 years of existence. Clark is an uncanny actor. In seconds, she can shift from the delicate sincerity of her first album (a smile and proper posture), to the miserable wretch of “Strange Mercy” (laying on stage, pleading), to the electrostatic inhuman of her self-titled (standing tall against a matte painting of a fanged monster). Throughout, Clark is a perennial showoman, in winks, smiles, and forlorn stares. She makes the stage alternate from an intimate confessional to a booming festival with the slightest trick of her mannerisms. I’ve never seen anyone so powerful a live performer. In this set, she reminds us who she is, what’s she done, and how damn good she is at it.

In the second set, we see Annie in a different way. If MASSEDUCTION is her most personal album, this is her most personal stage persona. As she plays her latest release from the top — with an excited crowd roaring along to far more lines than I expected — she is, maybe, herself. Awkward, odd, and quietly charming, Clark cracks jokes and welcomes the audience to join her in her experiences. “This song,” she opens power ballad “Sugarboy” with, “is for all the girls. This song is for all the boys. And this song is for everyone who doesn’t fit neatly into either of those.”

At the climax of “Happy Birthday, Johnny”, Clark offers an apology to the protagonist of her tragedy: “Of course I blame me”. This line is superimposed on the screen behind her, signaling how Clark wants us to see herself and her character these days. The new St. Vincent is not unattainable. She is vulnerable, self-loathing, and just as undone by her icon status as we are. She is human. She may, even, be real. 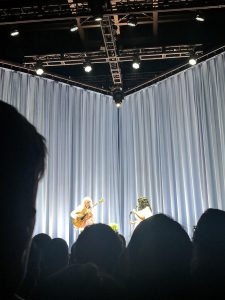 The most telling detail of who the woman behind the mask really is? The opening act, Tuck and Patti, a sweet couple performing an acoustic jazz set in heavenly whites. As Clark explains in a pamphlet handed out at the start of the show, these are her aunt and uncle, who first taught her the lifestyle of a touring musician. After a decade at the fore of the industry and her biggest release yet, Annie tours with them again.

You can tune in on Fridays from 6 to 8 PM to hear Jon and his broadcast partner The Danimal host Doomin and Gloomin on WPTS Radio.