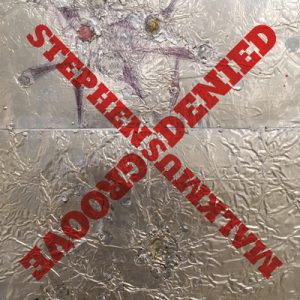 Radiohead did it. Animal Collective did it. Hell, even McCartney did it: continued making music knowing that Pavement had already perfected the medium. Additionally, all of these acts tried their hand at electronic music after a stoic history of cranking out incredible guitar-based albums, so it only makes sense that Pavement-frontman-turned-Jicks-namesake Stephen Malkmus would do the same. Groove Denied, the fabled electronic album from Malkmus, has been in the works for 12 years. While this is quite the stylistic shift for him, its electronic tendencies fade to reveal the Malk of yore as the album progresses; Denied reads as if Malkmus’ guitar got locked in a computer, he went to retrieve it, and came out with the knack for blending his trademark guitar chops with sleek programmed drums and subtle synth flourishes.

From the maximal celebration of “Belziger Faceplant” to the ambling “Forget Your Place,” Groove Denied’s first side displays a fondness for the synthetic with no discrimination. Lead single “Viktor Borgia,” manufactured straight from Dusseldorf, is the first semblance of a “song” by Malkmus’ definition that we have come to know and love. This retro take on electronic music is just ridiculously fun, and the way it unfurls before your ears makes you mad at Stephen Malkmus for being this good at music. This cut continues a musical motif laid out in the previous, new wave inspired “A Bit Wilder”: killer outros. Malkmus seamlessly repurposes the constituent parts of the tracks to send them off to sea with a confident groove. The side closes with “Forget Your Place,” quite possibly taking the cake for the weirdest song in his catalog; he utters a few non-sequiturs over a lightly bubbling ambience, a canvas on which he solos with some of his favorite instruments: the hi hat, beeps, and more beeps (different beeps)! Seriously, this track is so incredibly refreshing to hear from a frontman 30 years removed from his band’s debut album; Malkmus is still dripping with creativity and musical prowess, and it doesn’t seem like he’ll ever stop.

With all of the whimsical ideas out of his system, Malkmus goes back to his day job of writing the catchiest guitar jams with lyrics that seem nonsensical yet rich with meaning in the same breath. It’s very impressive that at this point in his career, he hasn’t written the same song twice: the man just knows how to conjure up a fresh melody out of thin air. These guitar driven songs are somewhat similar to 2018’s wonderful Sparkle Hard, but their subtle synth decorations and the prevalence of programmed drums connect them to the first side of the record well. This link is best realized on “Boss Viscerate,” a light tune with an unfairly good melody that finds Malkmus’ blooming guitar overflowing onto a crisp, splashy beat. Although I wish that Groove Denied would have continued in uncharted territory for its duration, these songs are still highly enjoyable. Maybe I’m just a sucker for 80s electronic music, Pavement, and eclectic albums, who’s to say. Nevertheless, this is a great example of an artist taking a risk and pulling it off, and a highlight in an already stacked discography.