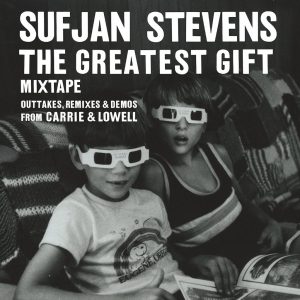 Sufjan Stevens has been very busy this year. Coming in with his third release of the year, following his “Carrie and Lowell” live album, and his collaborative “Planetarium” project is “The Greatest Gift,” a mixtape of sorts, featuring remixes, demos, and various outtakes from the Carrie and Lowell sessions. Kicking off this release is the wonderful “Wallowa Lake Monster,” a somber song, dealing with Sufjan’s abandonment as a child by his mother. Songs like this, or “The Hidden River of My Life” sound like they easily could’ve fit in “Carrie and Lowell” and it’s delightful to have these tracks available. The latter especially is a great track with a nice choir accompanying Sufjan on the chorus, echoing tracks from “Illinois.”

Being performed on just guitar, accompanied by Sufjan’s voice, is a hauntingly beautiful rendition of the song that I may well prefer to the original album.

Another standout outtake is the remix of “Exploding Whale,” a song originally released on a tour exclusive 7”, now finds a home on this compilation. These three are the jewels of the new tracks, though there are equally great remixes and demoes of other songs on the album. My personal favorite being the “iPhone Demo” of “John My Beloved.” Being performed on just guitar, accompanied by Sufjan’s voice, is a hauntingly beautiful rendition of the song that I may well prefer to the original album. Stripped back, and at a slightly faster tempo, the emotion in Sufjan’s voice is brought out and it’s just wonderful.

The other two remixes on this release that really stood out were the remixes of “Drawn to the Blood.” The first of which is a remix by Sufjan himself, featuring an electronic backing, that brings back tones of things on “Age of Adz” or even his “All Delighted People EP.” Contrasting this is the “Fingerpicking Remix,” where the backing instrumental track is replaced by a fingerpicking arrangement that complements the song nicely. It’s hard to figure out exactly where to place this release, as there’s only a handful of new tracks. But overall, this is a fantastic addition to Sufjan’s discography, with a few tracks that could easily become some of my favorites.