SWMRS at The Rex Theater – Review 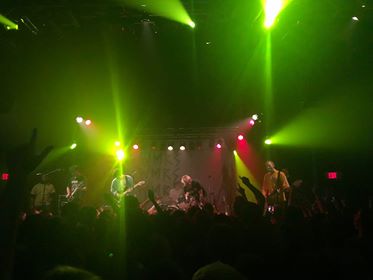 SWMRS is a four piece rock band from Oakland, California. The band is fronted by brothers Cole and Max Becker. Cole plays the rhythm guitar and Max plays lead guitar. They both share the responsibility of lead vocals. Seb Mueller plays bass guitar and Joey Armstrong plays the drums. Cole generally sings the the louder, more aggressive songs. Max sings the softer ones. The shift in tempo and voice adds a lot to both the live and recorded listening experience. I had seen SWMRS once before as an opener, but at the time I only knew their song “Miley.” Since then, I have become a fan of both the music and what the band stands for. They continuously preach about making their shows a safe place for everyone, but still a place where rock music thrives. So, you will see mosh pits, stage diving, and circle pits, juxtaposed with people lifting each other up and making sure that people get out when they feel overwhelmed.

Destroy Boys, a four piece from Oakland, CA opened the show. This was one of the band’s first dates on the tour due to another band dropping out for health reasons. I had never heard of them before, but they found a new fan in me that night. The lead singer, Alexia Roditis, was energetic and was able to get the crowd moving. It has been awhile since I have seen the first opener of a show get the crowd that excited. Their set was fun and refreshing, and I am looking forward to the future of Destroy Boys.

Beach Goons brought out the crowd surfers and stage divers

Up next was Beach Goons, of San Diego, CA. I also had never heard of Beach Goons before going to the show. This is very unusual for me, but the SWMRS concert snuck up on me and I did not have time to look into the openers. I wish I did though, Beach Goons brought out the crowd surfers and stage divers, which always keeps you on your toes. For most of their set I was carrying people from crowd to stage since I was in the front row. All the fun seemed to be happening in the center of the crowd, so I moved towards it.

I was not ready for SWMRS to go on. They walked out to “Steve Got Robbed” as the audience sang and cheered for them and then they officially kicked off their set with “Trashbag Baby.” Cole made it clear from the beginning that there was going to be nothing but respect happening at the show. And if something were to happen he wanted us to know that they would stop the show and kick out whoever was being disrespectful. SWMRS uses their platform to promote acceptance of everyone regardless of race, religion, sexualtiy, or any other differences found within the crowd. They also are very vocal about sexual assault. They bring these topics up on their social media and at their shows. They want to make sure everyone at their shows has a safe and enjoyable experience. They will do whatever they can to make sure everyone at their shows has a safe experience.

From start to finish I was having an amazing time.

SWMRS was one of the best pits I have ever been a part of. The crowd was amped up and ready for the show thanks to the great performances from the openers. Everyone was going wild, but when someone fell everyone made sure they got back up. In the center of the pit, I found myself participating in a wall of death for the first time as well as a few circle pits and some crowd surfing. My favorite moment of the night was when they played “Hannah,” which Cole acknowledged is a song that they do not do justice. The crowd came forth in a rejuvenated state. There were people on shoulders, crowd-surfers, and others dancing wildly. SWMRS puts on an amazing show. From start to finish I was having an amazing time.

They are not simply putting out music and playing shows; they are redefining how fans and artists treat one another.

As we left The Rex, I was reminded of why I love the venue so much: there is no barricade. Not having three feet between the stage and the crowd adds to a more intimate experience. We waited around outside for a little while and met Cole, Max, and Seb. They were just as kind as one would expect. They were outside the stage doors for so long after the show. Hanging around for so long after a concert shows how much they truly care for their fans. Everyone knows that tours are extremely taxing. The fact that they still took the time to meet everyone outside and have actual conversations with them tells a lot about their character. SWMRS is trying to create a new space within their scene. While it is often considered an accepting, safe place, there are always those who ruin that. SWMRS is trying to combat this by making sure their fans are taken care of. They are not simply putting out music and playing shows; they are redefining how fans and artists treat one another.

You can listen to SWMRS below: