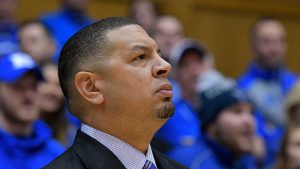 After Pittsburgh toppled #22 Florida State, they immediately began a five game slide, which began and currently ends with Syracuse. Pittsburgh lost the first of the two match-ups back in January by eleven, and were marred by ineffective inside play by the big men. Last Saturday, Pittsburgh lost again by eleven, but this time had strong play by Terrell Brown. Sadly, they could not get their threes to fall and ended the night at 22%.

An alley-oop by Terrell Brown was the highlight of the first four minutes but the Panthers trailed by twp as the game went to its first break. Pittsburgh missed seven shots in a row until a three pointer by Jared Wilson-Frame made it a three point game just eight minutes into the game. A deep three pointer by Buddy Boeheim put an exclamation on a rough four minutes for the Panthers as Syracuse extended their lead to seven.

Syracuse continued to dominate as they extended their lead to 13 with just four minutes left in the half. Both teams went back and forth and Pittsburgh was unable to make a dent in Syracuse’s lead as they led 35 to 22 at halftime. Pitt fought back early in the second half and forced Syracuse to take a timeout as Pittsburgh closed the gap to ten. Pittsburgh continued to fight back as Syracuse struggled and missed nine shots in a row and their lead was now five. Syracuse extended their lead to nine with three minutes left in the game thanks to four different players making layups. Both teams struggled to score in the remaining three minutes as Syracuse held on and won 65 to 56.

Jeff Capel mentioned after the game that he feels that it is interesting that the Panthers have not been getting to the line consistently, a sentiment echoed by most Pittsburgh fans in attendance. He only mentioned that is was interesting to see a decline in free throw trips with the same style of offense, and that he had called the league office about it. He refused to make any blanket statements about it, and only said, “I’m not allowed to speak publicly on a theory.” Perhaps something to think about for the Panther faithful.
Share