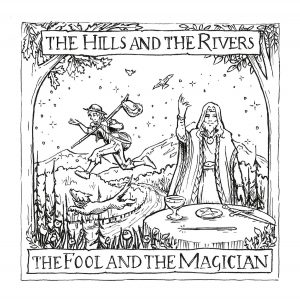 The other day I chanced upon seeing that WPTS had received an interesting album. It was made of brown cardboard with an even darker brown inked on the cover. The cover itself featured an interesting looking medieval scene; a vagabond and his dog, as well as a cloaked fellow doing some kind of ritual. The name of the band is The Hills and the Rivers, and the album, The Fool and The Magician.

I soon learned that The Hills and the Rivers are local to my hometown, Pittsburgh, which is fitting, as we have plenty of both hills and rivers. On Bandcamp they described themselves as “Post-apocalyptic river folk. From the roots to the branches, the springs to the sea.” That description in itself is already a sign of good things to come. The Fool and The Magician is their third album to date, and as I have stated, I have never heard of nor listened to them before. I was very curious about what I would hear.

I really enjoyed what the band put out. They sound very folky, and many pieces sound a little old school and acoustic. They have strong musicianship on the violin, mandolin, banjo, upright bass, and washboard. The Hills and the Rivers is composed of eight members, four of which are siblings. At least two, a man and woman, sing. It is possible that there are more, due to some interesting harmonies. The album itself is a concept album and tells a story in a poetic, first-person fashion. The Fool and The Magician is full of fast paced surprises, including a couple instrumentals and even a song called “Mmbop,” which is just some acapella rhythms. The sound is quite fun and bright, which makes it very happy folk. That isn’t to say that there aren’t some deeper and more somber songs like Middle Garden.

They have also put out quite a few homemade music videos, and it is pretty interesting to see Pittsburgh featured prominently in them.