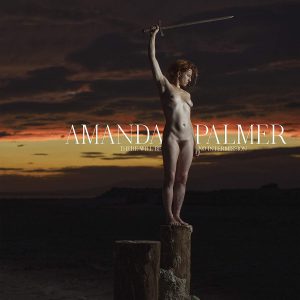 Crowdfunding has had an interesting relationship with music, especially with the recent failure of PledgeMusic. A key artist in this relationship, Amanda Palmer raised over one million dollars for her 2012 album Theatre is Evil on Kickstarter, a record for a musical project on the platform at the time. She faced a lot controversy at this time due to paying volunteer musicians in “beers and hugs” and questions of taking more money home than she claimed to amongst other publicity issues. She serves as a curious figurehead of the crowdfunded music scene. In 2015 she began raising funds on Patreon instead and has now returned with her newest solo album. With 20 tracks clocking in at 77 minutes, There Will Be No Intermission is an ambitious project from a unique artist.

With ten interludes separating them, the songs on the fittingly titled album all possess a lengthy runtime. None of them are shorter than five minutes, and two of them are over ten minutes long. With piano and ukulele serving as the primary instrumentation, there is a real risk of these pieces dragging on and becoming boring. However, as a result of Palmer’s songwriting prowess, these songs transform into a sort of epic narrative that constantly grabs your attention throughout. She sings about a wide variety of topics; from her journey of self-discovery during adolescence, to the guidance and protection found from the Judy Blume book series, and she even includes a compassionate message about the complexity and emotional impact of getting an abortion. All of these themes are matched with sparse but powerful instrumentation, and melodies that result in remarkably potent songs. The most compelling—and longest—song of all is “A Mother’s Confession.”

“A Mother’s Confession” focuses on the difficulties of parenthood and tackles this theme head on with a series of vignettes into Palmer’s life. The honesty on display throughout this monolithic piece results in the stories on it being profoundly impactful. After telling about a time that she left her son alone for a brief moment just to see him fall and then later using him as an excuse not to return a stolen chapstick, she hollowly cries out, “at least the baby didn’t die.” It’s a chilling moment that nonetheless represents the faintest glimpse of hope despite feeling broken. Throughout the remainder of the song, as more stories pass by, this faint declaration grows stronger before culminating into a truly anthemic finale as Palmer, joined by a choir, claims this central hope of parenthood.

The intermissions that divide There Will Be No Intermission are a deeply integral aspect of the project. Arranged by Jherek Bischoff, these haunting instrumentals give a chance for the previous song to truly settle into the mind and heart while setting the stage for the next piece to approach the listener. While they still maintain the oppressive atmosphere, these brief glimpses of respite allow the album to be a much more approachable work of art. Though the album title might have you believe otherwise, the instrumentals are what elevate this album from great to exceptional.

Final Thoughts: Thanks to her talented songwriting, Amanda Palmer’s There Will Be No Intermission pulls you in and never lets go.