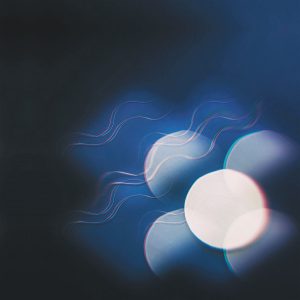 When I first found this album I was extremely excited. With a pleasant cover, artsy name, and a description that sounded like everything I look for in new music, Thunder Follows the Light was poised to be one of my favorite albums of the year. When you like everything that makes up an album, then surely you must love the album. Sadly, however, this was not the case.

Thunder Follows the Light is the most recent release by Jordan Lee under the name of Mutual Benefit. It is a sonically rich baroque-folk album that focuses on climate change and the idea that we are currently experiencing “lightning before some thunderous change.” Despite a rather heavy topic, the instrumentation feels very light and is accompanied by extremely transient vocals. From previous outings, it is clear that Jordan Lee knows how to write about trying topics, but he falls well short here as the tonal juxtaposition is just too jarring. I firmly believe that good lyrics do not make a bad song good and as such, bad lyrics (or in this case, poorly matching lyrics) do not make a good song bad. It is usually more important to look at the instrumentation, structure, and melody of a song to determine the quality. However, even in these areas, Thunder Follows the Light feels underwhelming.

The instrumentation is what originally drew me to this album, as it features acoustic guitars, clever piano playing, synths, smooth strings, and some airy flutes and clarinets. Taking every individual aspect of the songs, they are all exceptional. Each one is played with precision and grace and is an enjoyable thing to listen to. However, when they all come together, nothing really takes the lead. This causes each of the individually strong parts to paint a very grey soundscape that fails to pull you in. When combined with a very standard structure and melodies that are more focused on a wispy sound than a strong guide forward, the songs struggle to form a real identity. In many ways, this same description applies to Thunder Follows the Lights as a whole. There are some songs that actually manage to overcome their deficiencies and are quite likable, but when they are consumed with the rest of the album, they finally succumb and lose themselves to the dull backdrop.

It is rather difficult to develop a full opinion of Thunder Follows the Light. I like every single aspect of this album. The instrumentation is solid, the vocals are pleasant, and the concept it is based on could yield a dramatic and beautiful end product. However, despite the individual strengths being seamlessly woven together, it all frays into mediocrity when the time comes to listen.

Final Thoughts: While it possesses a very smooth sound, Thunder Follows the Light fails to catch either the lightning or the thunder.