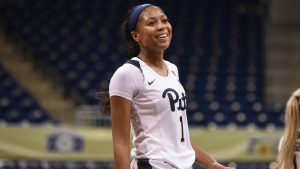 Lance White’s Panthers entered Thursday’s game still searching for their first ACC win, and sadly ended the game still searching. They matched Virginia in almost every statistic, except three point percentage, which continued to be the thorn in their side. Virginia shot an impressive seven for 18 from the arc, while Pittsburgh attempted 12 and only got 4 to fall.

WNBA fans recognized Virginia’s first year head coach, TIna Thompson, who was the first pick in the league’s inaugural draft in 1997. After an illustrious professional career which included an MVP and four consecutive championships, she accepted the offer to coach the Virginia Cavaliers. This victory over Pittsburgh marks her second ACC win, the other over Virginia Tech.

Pittsburgh kept things close in the first quarter with superb defense, but Virginia matched with three steals of their own. Pittsburgh struggled inside, missing five layups in the quarter. After ten minutes, Virginia led Pittsburgh 9 to 7.

Virginia continued to pull away in the second, mostly due to the scoring and passing of guard Dominique Toussaint. Virginia held Pittsburgh to just 14 points in the quarter, and only made one of their four three point attempts.

Pittsburgh came out strong after halftime.  Toronto-born star-forward Daniel Garven exploded for ten points, two assists, and a huge block to keep the momentum in Pittsburgh’s favor for the time. Her efforts along with two early threes and by Kauai Bradley helped shrink the Cavaliers lead to just seven. The Panthers headed to the final quarter down 43 to 50.

The momentum did not carry into the fourth, however, and the scoring woes continued for Pittsburgh. Their inefficiency on the free throw line continued to be the thorn their side as Cara Judkins missed all four of her free throws in the quarter. UVA finished off Pittsburgh with even attacks from Jocelyn Willoughby, Dominique Toussaint, and Khyasia Caldwell who had 13 points off of the bench.

Pittsburgh lost 74 to 57, but they have another chance to get their first ACC win of the season in their next home game: Virginia Tech. The Panther host the Hokies this Thursday, January 31st.