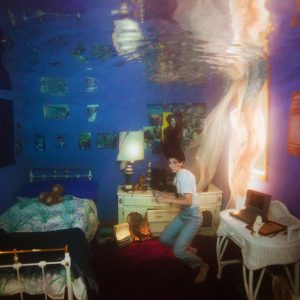 Natalie Mering, known as Weyes Blood, released her new album Titanic Rising on April 5th, 2019. This indie /alternative album is packed with beautiful lyrics, futuristic sounds, and classical instruments. The album is extremely unique and has multiple styles that representing different aspects of American music. “A Lot’s Gonna Change” is a great opener to this album, it sounds very similar to Pink Floyd’s work. The heartfelt vocals help carry the message of how inevitable it is to avoid changes in life. This smooth track helps listeners ease into the different styles in the succeeding songs. The second song, “Andromeda” can be described as a psychedelic folk song, it reminds me a lot of David Bowie’s style of music. Her voice is very soothing in this song and allows listeners to travel to the constellation themselves. It is accompanied by a twangy guitar and a steady beat of a drum. The song is about starting a new relationship that is raw and genuine. One lyric that stands out is “treat me right, I’m still a good man’s daughter”. It shows that she is human and wants to be treated with respect in a world where women are easily mistreated.

“Everyday” reminds me of the Beatles with its upbeat tone, and it is balanced out by a deep range on the piano. This is another love song that describes how the artist craves for attention and affection from her lover. This can be seen in her lyrics: “I see you everyday / But that’s not enough / I got this seeker running along a lonely line / Always trying to make my keeper mine.” “Movies” is the most experimental song out of the album. The beginning of this song reminds me of the score of futuristic movies such as Tron or Blade Runner. The song questions how media portrays love and idolizes the stars while washing away reality. Lastly, her style in “Picture Me Better” reminds me of those classic musicals I’d watch as a kid, like Singing In The Rain. This song’s style also reminded of Patsy Cline’s work in songs like “Sweet Dreams (Of You)”. This dreamy song is accompanied with a beautiful orchestra, airy vocals, and a gentle guitar. She croons on wanting to start a relationship with another person, and for them to see her in a more intimate view. Overall, Weyes Blood’s Titanic Rising offers a unique pallet of styles, each song reflecting on the broad themes of change, love, and the artificiality of our society.