Tough Times for Pitt Football Call for Patience, not Panic 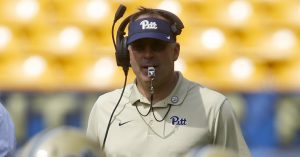 There is a lot of negativity surrounding Pitt football at the moment, and you could argue a lot of it is justified. They are 2-3, and the offense is ranked 92nd in the FBS and the defense 110th. A lot of people haven’t just hit the panic button, they’re in full out fire the coach and rebuild mode. I’m here to tell you to be patient. I know no one likes hearing that especially when your team is 2-3 after a lot of preseason hype, but sometimes it is needed. A rebuild after only four years of Narduzzi could be catastrophic to this program moving forward. Despite all this negativity, I believe there are some reasons to be positive, or at the very least, patient.

Kenny Pickett. Yes he has struggled so far this year, but you have to remember this is a true sophomore QB that has only started six career games. That’s it. Six. This is the same player that dominated No. 2 Miami last year with all three of Pitt’s touchdowns in the game. We’ve seen what Pickett is capable of, both making plays athletically and throwing the ball. Growing pains are common, and I still think the quarterback position is in good hands for the next few years at Pitt.

Pickett is not the only young player that has potential to do big things going forward. On the defense, a pair of local four-star recruits, junior defensive back Damar Hamlin, and redshirt freshman safety Paris Ford have both shown flashes of greatness in the secondary, and Ford has been close to breaking a few kick returns early in his career. Sophomore WR transfer Taysir Mack has not even been at Pitt for a full offseason yet and is arguably the team’s top wide receiver. Sophomore defensive end Rashad Weaver has been living in opposing teams’ backfields all season and Maurice Ffrench has been electric wherever he has lined up, whether that be on offense, defense or special teams. It also can’t be overlooked that Pitt has the eighth toughest schedule in the FBS according to ESPN.

There is a lot of young talent on this team currently going through growing pains, add that up with the eighth toughest schedule in the country, and there’s going to be some challenges. Sometimes things get a little worse before they get better.

The schedule can’t get any harder next year, and the most important position on the field will have a full year under his belt. Maybe I’m being too optimistic, but I don’t think this team is hopeless, or in need of dire rebuild, that’s how you get stuck in a revolving door with coaches and recruits leaving. We need a little patience. If, at this point next year, Pitt is in the same situation, then we can probably sound the alarm. For now, we just need to let things play out, and let players develop before we decide to start all over.