Tranquility Base Hotel and Casino by The Arctic Monkeys – Review 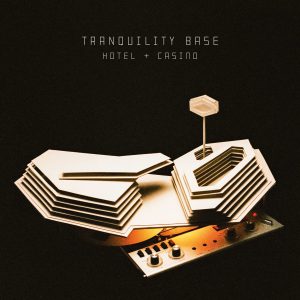 For lack of a more elegant, gender-neutral term, it takes a lot of creative balls to turn away from what made you successful to begin with and try to go a different direction. It’s easy to rest in the lead, to stagnate; it’s harder to innovate. Innovation becomes a doubly risky business when you consider that there’s no guarantee the direction you choose to innovate in will be a profitable one, let alone an interesting or critically successful one. This makes it all the more intriguing that the Arctic Monkeys have chosen to return from the five-year hiatus that followed 2013’s AM with such an altogether strange, unusual, and utterly un-Arctic Monkeys-sounding album. However, I think Tranquility Base Hotel & Casino may have been the perfect way for Arctic Monkeys to return from hiatus, even if it may not be, in a strict sense, the best Arctic Monkeys album possible right now.

Consider AM, which I don’t think I’m out of line in calling a top contender for the title of “biggest rock album of the 2010s,” even five years later. AM was the album where the Arctic Monkeys seemed to finally deliver on all the hype and promise that accompanied their ascension to the top of the modern rock world with the one-two punch of 2006’s Whatever People Say I Am, That’s What I’m Not and 2007’s follow up LP Favourite Worst Nightmare. 2013’s AM was the record where all the NME plaudits finally became reality; the Arctic Monkeys were finally the big-time rock stars we were always promised they’d be, with the big time radio hits to match. Beyond these radio singles, I’m not crazy about AM as an album. I felt that AM represented a creative dead-end for the band. While it was unquestionably their most successful album to date, I felt the band had lost some of their swaggering teenage personality present in their earlier work.

Tranquility Base does not lack for personality as it’s simply oozing the personality of the high-living, jaded, manchild sleaze-king that the Arctic Monkeys’ omnipresent frontman Alex Turner either is or pretends to be, depending on who you ask. The outline of this general persona is crystallized into mostly piano-driven neo-lounge music that Turner wrote and composed almost entirely on his own. This does, of course, raise the question of why this isn’t an Alex Turner solo album. Outside of a few guitar licks, some light drumming, and a bit of vocal backing Matt Helders, Jaime Cook, and Nick O’Malley’s presence here is almost totally unnecessary. This is especially tragic in Matt Helders’ case as I’ve always considered his percussion a crucial component in giving dramatic weight to the Arctic Monkeys signature garage rock stylings, which can otherwise sound a bit juvenile.

The music itself, in all its highs and all its lows, is undeniably interesting, which is why I have to respect the decision to not only try this new direction but also commit to it. Coming back with eight or nine new same-old-same-old Arctic Monkeys guitar songs would have been easy, safe, boring. Such a dramatic change in directions raises eyebrows, whether for good or bad reasons. It’s impossible to discuss the Arctic Monkeys as a music act for any amount of time with out tripping over the fact that Alex Turner has never appreciably evolved as a songwriter, which wouldn’t be such a problem if we weren’t introduced to him as a 16 year-old. Turner at least appears willing to try, the quirky fun of “The World’s First Ever Monster Truck Frontflip,” and the almost Flaming Lips-adjacent title track provide the kind of side attractions a change in direction this dramatic needs. You can absolutely see why Turner thought this weird neo-lounge concept leaning almost entirely on the piano, synths and some light guitars could carry a full album on tracks like “Star Treatment” and “Four Out Of Five,” which take the more relaxed pace of the lounge motif and use it to stretch out over a canvas of faded glory and rock star luxury.

There are also groaners here however, the lukewarm political statement of “Golden Trunks” (“the leader of the free world/reminds you of a wrestler wearing tight golden trunks”) has nothing meaningful to add to the existing political discourse and so only serves to come off as cynically fishing for anti-Trump brownie points. Songs like “One Point Perspective” and “Science Fiction” ironically run into the same problem AM did, where all the filler blurs together and becomes indistinguishable from itself. To be frank you could probably hack off the last four songs from the end of this album and it wouldn’t be missing much. Tranquility Base peaks hard and then falls off.

This is Alex Turner’s record through and through, and your mileage may vary with that concept. A lot of that variance comes down to how willing you are to accept the idea that a man who’s worn the prestige, wealth, and pomade-solidified pompadour of one of the world’s biggest rock stars for most of his adult life is now capable of putting his tongue in his cheek about the whole concept of stardom in good faith (“I just wanted to be one of the Strokes/Now look at the mess you made me make” is the line that opens the album).

I wrote above about how you could either read the person outlined in Tranquility Base Hotel and Casino as either Turner himself, or just how he appears to the world, and doubtless we’ll see some disagreement and debate over this album and Turner’s place in it. Some will view this album as overindulgent tripe, the Arctic Monkeys finally jumping the shark like we all knew they would while an overhyped garage-rock has-been rants and raves like a lunatic. Others will see a band that’s gained maturity and sophistication by turning away from its roots, while one of the world’s biggest celebrities decays like a red giant star. So what exactly is Tranquility Base? Is it good natured schlock? Is it more lad-rock nonsense with a new coat of paint? Is it a cry for help? Is it a concept album about Batman?  It’s all of this at once and as a result it ends up as an album that, for all it’s highpoints, never quite comes together as a coherent work and decides what it wants to be.

You can follow John on Twitter @Wright_JohnP and tune in on Fridays from 5 to 7 PM to hear him host Jet Set Radio on WPTS Radio. This review was edited by Stevie Priller of the WPTS Editorial Board.