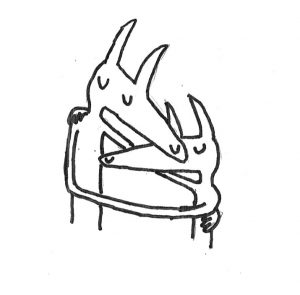 What is an album? It’s a collection of songs, but more than that it is a snapshot of an artist captured at a specific time in their life. So what does it mean when a band or songwriter wants to revisit those songs in an attempt to make them more complete or relevant to how they feel today? A good person to ask such a question might be Will Toledo, the front-man of Car Seat Headrest, who completely re-recorded the band’s album “Twin Fantasy” updating it with new passages and lyrics not present in the original album. A follow up to 2016’s “Teens of Denial”, this album gives a sound closer to Car Seat Headrest’s new, full band sound, over the older “One-man on a computer” music that one would expect from their output in the early 2010s.

The original release gained a bit of a cult-following, notably through a few online music sites and discussion boards after its debut on Bandcamp in 2011, leading to what many would call an “indie classic.” In December of 2017, the band dropped the first taste of this re-release with the thirteen minute epic “Beach Life in Death.” Featuring a completely different recording style partnered with new and altered lyrics, it was a good representation of what should have been expected from this album. They are recreations that reflect upon the growth that both Will, and the band itself, have seen over the past 5 years.

I feel as though opinions on this album may be split depending a listener’s personal relation to the original album. While I do love some of the original versions of these songs, I feel like the album never clicked fully for me, whether it was due to the limited production, or just because some of the songs weren’t as fleshed out as they are on this version. My biggest worries for this new release came with the songs “Sober to Death” and “Bodys” which were some of my favorites off the original. The former stays as one of my favorites on this newly recorded album. It features explosions of sounds on the chorus and new backing vocals that just really transform the song in a fantastic way. Similarly, “Bodys” has been expanded in ways that I just love, such as punchy synths that really drive the song complimented with a fantastic drum beat.

Songs I think may have been negatively impacted by the re-recording are “Stop Smoking” and “Nervous Young Inhumans.” The original “Stop Smoking” served as a great dreamy interlude, with a nice fuzzy production that worked wonderfully as a transition between the chaotic “Beach Life in Death” and melancholic “Sober to Death.” In my opinion, the change in production negatively impacted this version of the song, but this is just a minor complaint. As for “Nervous Young Inhumans,” the first half of the song has this awesome driving drum beat that transitions into spoken word, which is completely re-written from the original album. On the original version of this song, Will talks about his usage of language on the songs chorus, resulting in this kind of “meta” take on the song, which fits well with other songs on the album that do similar things. On the re-recording however, this is replaced with a longer piece that seems to focus on other narrative themes from the album. But I just feel it isn’t as good as the spoken work on the original song, and causes it to drag as a result.

Other favorites on this album include “High to Death” and “Cute Thing.” “High to Death” has a new sound in comparison to the original, featuring interludes and added effects under the verses that serves to make it a lot trippier. This is in sharp contrast with the original which felt like it was drowning in layers of fuzz and reverb. I loved “Cute Thing” as a song already, with its proclamation about needing to become a rock god, while apologizing for how romantic the narrator is being. The song benefits overall from the up in production, with new harmonizing vocals on the chorus, becoming a treat to listen to.

While listening to this album, many are going to feel a driving need to compare this to the original and ask why someone may feel the need to re-record and mess with what is already a good album. I feel like this goes back to the question of what the old version represents. Will Toledo is no longer a 19-year-old, maturing as both a musician and a person. So while it may provide an interesting look into his mindset at the time, this updated version serves as a more honest portrayal of the kind of person that Will is today, while also being a better representation of the music he’s producing.

You can tune in to hear Thomas host The Monday Morning Power Hour Tuesdays from 2 to 4 PM and WPTS Local Show Fridays from 5 to 6 PM. You can also follow them on Twitter @HeelTurn420. This review was edited by Alyssa Davidson of the WPTS Editorial Board