Former Pitt star and current Cincinnati Bengals wide receiver Tyler Boyd returned to his hometown on Saturday morning to host his first ever youth football camp at Clairton High School, where he is a proud alum.  Boyd was drafted with the 55th overall pick in the 2016 NFL Draft and is viewed as one of the most promising young wide receivers of the class.

At Clairton, Tyler was a crucial part of the Bears’ 63-1 stretch that led to four consecutive WPIAL and PIAA championships.  He also set the WPIAL record for touchdowns (117) and placed fifth on the all-time rushing list with 5,755 yards.  Therefore, the hometown crowd in Clairton was happy to welcome back their hero, and Boyd was delighted to make his return while providing a unique opportunity for young football enthusiasts aged 8-15. 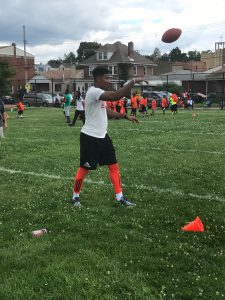 “It means so much to me, you know, cause when I was young, their age, I wasn’t able to go to things like this.  Everybody’s always talking about, if you ever make it, you just wanna give back, be the guy to continue to lead the legacy.  In the summer, just keep coming back and just show them the ropes and teach them how and what it took to get to where I’m at now,” said Boyd.

The Bengal had the assistance of some of his old friends and former teammates at the University of Pittsburgh.  Terrish Webb, Avonte Maddox, Tyrique Jarrett, and Aaron Mathews were all in attendance, coaching various drills to give the kids an assortment of different activities. 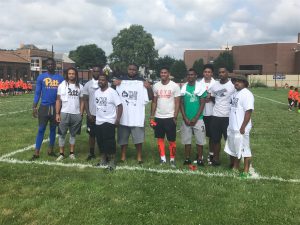 Webb, a defensive back, played with Boyd at Clairton and Pitt and was signed by the Pittsburgh Steelers shortly after the 2017 NFL Draft.

“It just feels good.  This is where me and Tyler were born and raised, so just to be able to give back and feed them the knowledge that we know now, it’s an awesome experience,” said Webb.

A defensive lineman, Jarrett was signed after the draft as well by the Denver Broncos.

“It feels good to give back to the children, you know, cause when I was young, we had the same thing, same support system, and coming out here, coming back to Clairton, this is where I started at.  I started everything here.  The wisdom, everything, it starts here as a kid.  It means a lot.  This is home to me.  This is where we used to be back in the day.  As kids, we used to play tackle out here.  This is nothing new,” said Jarrett.

Mathews, another graduate of Clairton High School, and Maddox will return to Pitt in the fall for their sophomore and senior seasons, respectively.

“It feels good man, being able to give back to the community, able to see the kids have fun and be able to teach someone, it’s a good thing,” said Maddox.

Boyd is looking forward to his second season in a Cincinnati Bengals uniform, especially for two duels with the Pittsburgh Steelers.  Tyler was just 12 years old when Ben Roethlisberger led the Steelers to a victory in Super Bowl XL, and now he’ll be meeting with him twice a year in the AFC North.  While Boyd will square off against his fair share of veterans against Pittsburgh, he’ll also see some young talents, including rookie James Conner, a former Pitt teammate and close friend.  He’s quite familiar with many Steelers as the UPMC Performance Sports Complex in Pittsburgh’s Southside is the only facility in the United States to serve as the training venue for an NFL team and a college program.

“There’s gonna be a little bit of talking going on.  You know, that’s gonna be one of the funnest games.  I love playing against them, those guys, cause you know we shared the same facility.  I know a lot of them guys.  It’s a lot more fun competing against guys you already know.”

The road to professional success is not an easy one for Boyd, who is in the midst of a somewhat crowded receiving group in Cincinnati, where A.J. Green, Brandon LaFell, and newly drafted top ten pick John Ross accompany Tyler in the depth chart.  However, the second-year player has kept a clear focus. 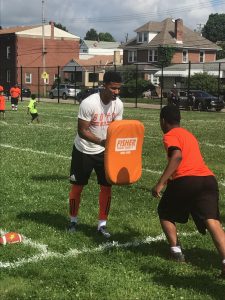 “Just continue to do my role.  Always make plays when my number is called, my name is called, and just be a reliable guy no matter what.  I’m not gonna be greedy, not gonna be selfish.  Just gonna be a guy that’s dependable and a guy that my players can count on.”

Tyler distributed autographed photos to each of the approximate 200 campers on their way out while taking photos and making sure everyone enjoyed the day filled with football. 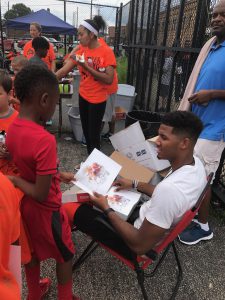 “It went smooth, a lot smoother than I expected, especially with all the help I got around the community.  I got a lot of coaches from the youth football team, I got a couple guys from the University of Pittsburgh, couple guys that I went to Pitt with that are currently in the NFL.  I feel like it went real well.”