UCF tops Pitt in first game of the White era 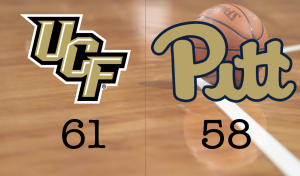 The Pitt women’s basketball team fell to UCF in its opening game of the season on Wednesday by a score of 61-58.  The 11 AM contest was the official start of the Lance White era at Pitt as the former Florida State assistant aims to excel in the first head coaching role of his career.

The Panther defense was strong to start the game, limiting the Knights to just one field goal and five total points in the first quarter.  UCF was held without a score from the field for the final nine minutes and 13 seconds of the quarter as the Panthers jumped out to an early 12-5 advantage.

The Knights trimmed the lead late in the second quarter, connecting on six of their last eight field goal attempts to close the half down two, 26-24.  After 20 minutes, Aysia Bugg led Pitt scorers with nine points, while Jamesha Paul tallied six to lead UCF.

UCF continued its run to start the second half, forcing a Panther timeout just two and a half minutes into the quarter after opening with a quick 7-2 run.  The two minute Pitt scoring drought also featured three turnovers, contributing to the team’s 20 for the game.  Pittsburgh bounced back following the timeout, closing the quarter on a 19-10 run that ended with a two minute scoring drought for the Knights.  Jasmine Whitney was vital to the success of the Panthers in the quarter, knocking down five of six free throw attempts in its final four minutes.  Pitt entered the fourth quarter with a 47-41 lead.

A back-and-forth battle in the fourth finished with the Knights on top by a final score of 61-58 as the Panthers missed their final five field goal attempts of the game. Despite equivalent 40 percent shooting for each team, Pittsburgh was significantly outmatched in the turnover battle, conceding 20 giveaways to UCF’s seven.

Pitt falls to 0-1 for the season and is set to resume action this Friday in a home game against New Orleans at 4 ET.