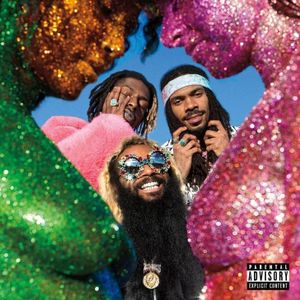 Psychedelic Hip-Hop is a genre that most Hip-Hop lovers are fans of, and a term that not many people know how to define. It consists of complex bars and beats as well as witty lines and obscure references. Some examples of artists in this genre would be De La Soul, Beastie Boys, and the artists who just released their sophomore album: Flatbush Zombies. The group consists of three emcees, Erick Arc Elliott, Zombie Juice, and Meechy Darko, and are one of the most interesting hip hop groups that I have ever listened to. Their debut album This Is It and their EP Day of the Dead demonstrated the trio’s ability to effectively deliver internal rhymes in their bars without losing the clever (and often slightly crude) meaning behind them. Flatbush Zombies also kept me engaged throughout their nineteen song sophomore project Vacation in Hell with both that strategy as well as the clever deliveries by each member in each song.

Vacation in Hell manages to continue the image of Flatbush Zombies as a Psychedelic Hip-Hop album with their lyrical styles and beats. They carry themselves as confident and talented friends who often challenge the conventional aspects of society and rap. They boast about their accomplishments and their ability to stay themselves in the song “Chunky”, which features the trio equally in the verses and conveys their rise to fame as a team effort. They challenge the showboating by people who lie about themselves to attain the same amount of fame that they have in my personal favorite on the album “Facts” (ft. Jadakiss). Darko has a more gruff and strained style of rapping, creating a more confrontational feeling towards those who try to stunt on Flatbush Zombies and appear as cool as the trio is.

Flatbush Zombies often rap on Vacation in Hell in a way that refers back to their roots, either through their vocals or through their lyrics. In “Ask Courtney,” Darko and Elliot speak throughout the song, alternating between American and Jamaican accents, conveying both of the backgrounds that the trio come from. They also do this in the single on Vacation in Hell, “U&I”, when the group raps about the neighborhood in Brooklyn where they grew up and their families that helped them become the men that they are today.

Regardless of the contrast in content, there is very little contrast in the style of their instrumentals and rhythms, constantly conveying a more experimental style in their vocals and the dark and ominous sounds of the instrumentals. Vacation in Hell is an amazing album that managed to keep me listening for all 19 songs. I was worried that with the length of Vacation in Hell it was going to lose its charm and succumb to sophomore slump like a lot of artists do. However the production value, the unique music style, and the engaging lyricism of the Darko, Juice, and Elliot kept me hooked for the entire album. The only true gripe I have with the album is that Juice’s parts were lacking more than the other two and that one of the songs, “The Goddess”, has a few lines fetishizing bisexual and pansexual women. Other than that, Vacation in Hell absolutely exceeded my expectations for Flatbush Zombies’ sophomore album. Their debut was so amazing that I was initially worried that anything they put out wouldn’t be able to compare. However, this album proved me wrong in a good way and, after listening to it on repeat for days now, I am anxiously anticipating the future of Flatbush Zombies.

You can follow Dakota @ay__arnold  on Twitter. This review was edited by Derek Adams of the WPTS Editorial Board.