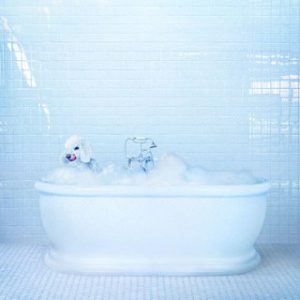 Frankie Cosmos makes music to play on a car ride on a warm day, but also the kind of music to cry to with its almost-too-relatable lyrics. That’s what drew me to them in the first place: this sense of polarity and witty lyricism. I love Frankie Cosmos and have been following them since I first heard “School” in 2014. I related a lot to the lyric “High School made me cry”. I have grown quite a bit since this song, and so has Frankie Cosmos; they are no longer just another bedroom pop band. This is shown most by their departure from the Bayonet label and subsequent move to the larger Sub Pop. Also, since the release of the last record, Gabby Smith and Aaron Maine have both left the band to focus on their own projects. This all drives towards the point that Frankie Cosmos is a different band then they were, when their last record “Next Thing” came out in 2016. Their most recent release “Vessel” in my mind represents a departure from being a DIY band, an introduction of a new, more polished Frankie Cosmos. It’s a little over 33 minutes with 18 tracks; the tracks are short, averaging 1 to 2 minutes long. Some of this album consists of reworkings of old songs with a full band, but a lot of them sound nothing like the previous versions.

“Caramelized” is a strong start to the record, beginning like a classic Frankie Cosmos song: slow with a strong melody and beautiful vocalization, but then the drums come in and the melody changes to something a lot faster and more dynamic with a few changes in time signature. “Apathy”, one of the singles off of this record, continues this new sound of Frankie Cosmos, being faster and fuller and more dynamic. “Apathy” is a song about not feeling like a relationship is working anymore, but forcing yourself to make it work. “Do you want to go on a date?/Or would that be hard to orchestrate?” “As Often As I Can” is a song that goes into the category of jingle, it’s short, sweet, and catchy as heck.  “This Stuff” is a personal song about change, where Greta feels uncomfortable about things and her wants and desires, but also her being aware of who she is. “Jesse” the first song released from this record, which made ignore whatever class I was in. “Jesse” was a lot faster and harder then previous Frankie Cosmos songs and shows the band’s transition., It has some quick, interesting time changes, and just Greta feeling more comfortable with this fuller band. “Duet” is a song I thoroughly enjoy, because it’s about about a crush and is a very upbeat with some great instrumentation, including this cool alien noise, which is the only distinction from the original. “Accomodate” is a quick song about questioning whether you work for your body or if your body works for you. It’s a very fun track and is definitely one of my favorites because of its relatability “I’m Fried” is a slower song, where she’s trying to take care of herself, but isn’t sure how. Its chorus is another relatable lyric:  “I just wanna know that I would walk away from wrong”.

“Herby” is a quick jingle, no chorus, just a fun quick track with strong drums and devastatingly sad lyrics. She just wants the time she wasted in her last relationship to be made up for and is also the transition into “side a”.  “Ballad of R and J” is strange, because Greta doesn’t sing the lead. It’s a song about two people, Ricky and Julie, whose relationship is over now, and Julie misses him. The song is Greta letting out her emotions. “Ur Up” is a quick jingle about thinking about someone from afar and late at night. It’s a beautiful short piano ballad;she messes up a bit and it just feels so personal in such a short time span of 30 seconds. “Being Alive” is a perfect song and you can’t tell me otherwise. It’s catchy, fun, and motivating, also it features fellow bedroom-pop artist Anna McClellan. I really love the chorus of being alive, “Matters quite a bit, even when you feel like shit”, because it reminds us that we are only human. “Bus Bus Train Train” is a song I love; it mentions Jojo Greta’s dead dog and reminds me of very early Frankie Cosmos, specifically “Busses Splash with Rain”. It has probably the darkest lyric on the album in “I see Joe Joe/In taxidermy museum”. “My Phone” is a short jingle where Greta is saying her relationships don’t require internet. “Cafeteria” is a song that brings out the same feelings in me that I felt when I first heard “being alive”. It’s definitely one of my favorite songs on the album.  It has the lyric “I had sex, now I’m dead”, which I personally think is a really witty and funny lyric. “The End” is about the end of a relationship and how both parties end up crying in the end, and it’s got that real lo-fi Frankie Cosmos feel. “Same Thing” is a short song with a really strong riff; I love the line “Hours wasted on the train/ Everybody’s part is pain/But it’s nothing like the thing”. “Vessel” is a strong closing track that really sums up the album sonically and emotionally. The album changes moods very frequently and so does this song.

With this album, she’s trying to show that relationships can end well once you realize that it meant nothing. I love this record. I am going to give it a 9/10, because I really think it’s strong and she really has learned how to better utilize her band. This record lived up to the singles in my opinion and really shows how diverse Greta Kline is as a songwriter. I can’t wait to listen to this album in the middle of spring on lonely days or to add this to my “it’s sunny outside, but I’m not happy” collection. Frankie Cosmos is the music I was really into as a teenager and it makes me so happy to hear her grow as I’ve grown too.

You can come cry with Elyssa as she hosts Anxiety Hours from 2 to 4 PM on Mondays on WPTS Radio! This review was edited by Sean Bailey of the WPTS Editorial Board.