For five days this October, Pittsburgh was transformed into a national hub for virtual reality, psychedelic visuals, and underground dance parties. A blend of contemporary music, art, and technology, VIA transcends the boundaries of a traditional music festival by offering attendees a wide range of multimedia displays in multiple venues scattered around the city.  The first festival of its kind in Pittsburgh, the five-day event presents the city with a mash-up of video, music, films, games, and workshops every fall.  Since 2010, it’s brought in big names from the experimental music world like Oneohtrix Point Never, Battles, and Andy Stott, while showcasing the work of local artists at the same time.  Among VIA’s most defining attractions are the combined audio-visual performances, where video artists manipulate projected visuals to accompany musicians in real-time, lending the shows an immersive power that is never the same. Magazines like Huffington Post, Resident Advisor, and VICE have all praised the forward-thinking approach of VIA, making it one of Pittsburgh’s ambassadors of art and culture to the world. 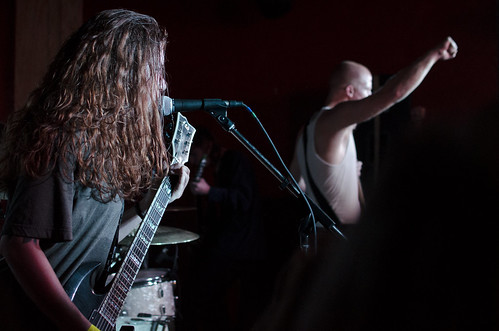 This year’s festival culminated in an eight-hour musical / visual showcase held in the city’s historic Union Trust Building, located in the heart of downtown. The former shopping arcade stands out amidst the skyscrapers with its striking gothic mansard roof capped by two regal dormers.  But the view hidden inside is even more impressive, for a gorgeous stained glass dome tops a gold rotunda reaching ten stories high.  The building is a testament to the city’s underrated creativity, making it a fitting site for the main event of this year’s main VIA event. 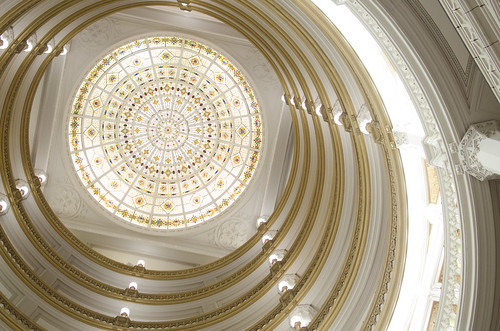 The Historic Union Trust Building
The first thing visitors to the building saw was a giant white bubble that filled the whole lobby.  This was the site of ASMR, a joint art project and relaxation session that utilized the capabilities of the virtual reality headset the Oculus Rift.  Participants were lain on a comfortable mattress with a set of glasses and headphones that took them into a digital spa environment.  What followed was a calming journey through the trees and into the sky that transported the viewer out of their body and into a peacefully surreal digital Nirvana.  Though some mild pixilation and outside sound interference took me slightly out of the experience, it was a certainly an unforgettable trip that hinted at even greater possibilities for virtual reality in the years ahead.  Also featured on the main floor of the building were some experimental video games featuring animals, a virtual reality life drawing booth, and a some heavily edited video art.  For most attendees, though, the main attraction was downstairs.

In preparation for the event, VIA transformed The Union Trust’s barren basement into a full-out dance-floor, with two intimate artist stages and a refreshment stand to boot.  The first act of the night was Troxum, a Pittsburgh native who composes spectral soundscapes coated in reverb and distortion.  He manipulated his video projections himself, which contained apocalyptic visions of the Earth’s demise and regeneration, a fitting compliment to the overdriven force of his heavy cathedral-level synth swells.  Following him was Diode Milliampere, a multi-talented chiptune composer who works with old and new technology to make rich and colorful dance tunes that glisten with analog warmth.  He performed a day after having delivered the keynote speech at CMU’s Demosplash event, a demoscene exhibition co-presented by VIA.  Though they put on great shows, these two acts were warm-ups for the even more exciting performers who were to follow.

The show started to get wild when Memphis based rapper Cities Aviv took the stage.  Project mastermind Gavin Mays’ background as a hardcore punk vocalist was apparent in both his dissonant production and frantic dancing on stage, like David Byrne fighting to escape a K-Hole.  At one point during “URL IRL”, he lept forcefully into the crowd, breaking an audience member’s glasses (which were thankfully fixed).  This kind of rowdiness would be unjustified if it didn’t perfectly compliment his music.  Aviv’s music more feels more like a new brand of garbled cyber-industrial techno than conventional hip-hop.  CGI bodies warped and stretched on screen behind him, a fitting compliment to his shouted lyrical statements on the information age (“Hit me through the void, via text message / No emoji’s very emotional for punctuation”).   He closed his set with the lights off in a trance-like state of arm flails over a looped vocal glitch, approaching something near transcendence or maybe madness.

Flamboyant rapper Cakes Da Killa offered hip-hop intensity of a different sort.  The 23-year-old rapper made a massive statement with his 2012 mixtape The Eulogy, an infectious expletive-filled proclamation of his sexuality to the world.  Even before he went on, his entourage of dancers could be spotted vogueing furiously in the crowd.  But once he took the stage, he was a force to be reckoned with of his own.  Cakes delivered banger after banger of filthy lightning-fast rhymes with a cheeky grin and mesmerizing don’t-give-a-fuck attitude that turned the basement into a party fast.  An entire verse of meowing modeled after the Meow Mix theme didn’t feel out of place at all in his highly entertaining set powered by his personality.  He was not afraid at all to demand what he wanted from the crowd.  At one point he commanded them to part in two for him to parade through the center by shouting “Part this shit like Moses!” I’m sure I wasn’t the only one left wanting more when his set ended, and I wondered how the next act could possibly follow him up. 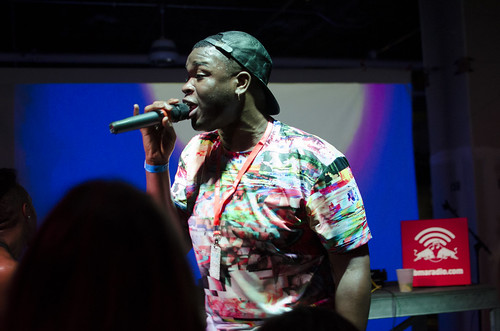 Thankfully, Blue Hawaii didn’t even try to do something similar to Cakes, but they still kept the dance floor just as alive.  The boy/girl duo craft relaxing ambient pop on record, but live they’re a different group entirely. They turned their wispy, distant tunes into a gorgeous forty-five minute techno set with singer Raphalle Standell-Preston’s ethereal vocals soaring angelically over the constantly evolving, complex grooves.  Producer Alex Cowan resembled a mad scientist, manipulating several pads and samplers with frighteningly dexterous control. I stood up front and tried in vain to comprehend how their knob-twiddling was producing the music I heard.  Eventually I gave up and chose to lose myself to dancing instead, having much more fun that way anyway.

If Blue Hawaii were a sunny party along on the shores of Hawaii at sunset, then Zebra Katz was a sea monster emerging at night from the ocean to ravage vacationers.  It was 1 A.M. by the time the towering behemoth of a man waltzed onto stage through the crowd.  He came on unannounced, wearing an army-bondage outfit and black mask and wielding a bottle of uncorked champagne.  What followed was the craziest show of the night by far. Zebra’s dark, minimal take on rap was eclipsed by his sinister, sexually-charged stage presence.  He grabbed people’s bodies, simulated sex on stage, and popped the champagne over the audience.  Everyone wanted a piece of Katz; at one point there were at least forty girls dancing on stage with him, an apparent safety risk as a cop had to escort them off.  That didn’t quite stop the party, though.  Katz knew how to work a rabid crowd like no one else that night. For his last song he was hanging above his adoring fans from the metal light fixture, powerful and fearless.  It was a sight to behold. 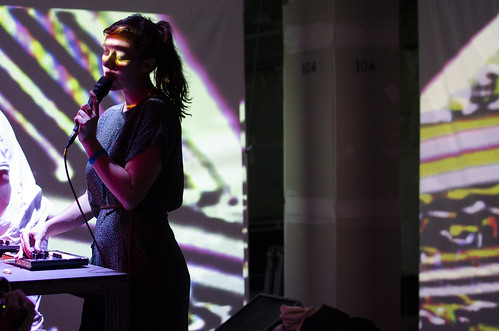 Those who weren’t yet tired of dancing were treated to the evening’s headline set: a straight-up back-to-back DJ set between two major forces in dance music, L-Vis 1990 and Traxman.  Hailing from London and Chicago respectively, the two are central figures in their personal scenes: the former a bass-heavy brand of genre-defying grooviness, the latter a hyper-speed battle-dance called footwork.  Together, though, the two found common ground with a straight-forward and no bullshit DJ set of collaborative club music.  Their personalities bounced off of each other perfectly.  L-Vis spent most his time working the decks, while Traxman acted as hype man and generally cool dude, brining beer after beer onto the stage.  Personally, I was hoping to hear more of their individual idiosyncratic styles, but I was also fatigued from having expended my body’s dancing capacity this point, and couldn’t even process the dazzling rhythms anymore.  However, watching two masters work together at their craft in sync with eachother and the crowd felt like a beautiful moment of friendship, and a fitting end to a night that had offered so many feelings of fun and unity that dancing together with others can provide.

Despite the wide variety of performers on stage, the daring and open-minded attitude of VIA was felt in every aspect of the showcase that night.  An after-party followed the show at Hot Mass for anyone with energy still left.  Events like this would rarely be expected to happen in Pittsburgh: maybe New York or San Francisco, but not here.  Having events like VIA in happen in the city play a huge part in making Pittsburgh the increasingly progressive place it is today. May next year’s show be just as crazy.