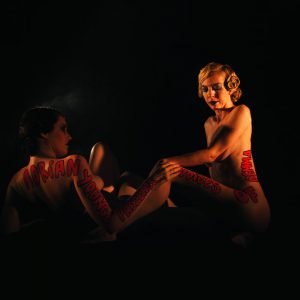 In his new album Voices of Gemma, Adrian Younge takes us on a 26-minute-long journey in pursuit of love through his meticulously crafted, dreamy soundscape.

The listener is brought into this space with opening track “Stranger by the Sea,” which starts with strummy, beachy guitar and a chillingly beautiful soprano voice that somehow complements the guitar perfectly. Then the bass and drums kick in and the vocalist starts reciting lyrics to describe this surreal narrative that bends love and time. Flutes, soon followed by a string section, fill the sound to complete the pristine watercolor image. This layering provides so much depth to a song that could have been simple: not only does each new addition, well, add something, but it also frames every prior layer in a different perspective. “Stranger by the Sea” serves not only as an introduction, but also as an excellent overview of what’s to come. Younge’s expert layering of sound components is part of what makes this album so distinct as a whole.

This album can be broken down to two things, really: the layers and the cooperation between them. Adrian Younge uses a brilliant minimalist version of a proper soul rhythm section, in which the bassist and drummer provide tight, rhythmic support without being timid about adding funky interjections here and there either. Yet on top of this solid foundation is an eclectic collection of high voices and mystical timbres that sound like they could be from a Danny Elfman soundtrack. The interplay between these two sounds—a rooted, grounded floor and a soaring, ethereal ceiling—is sometimes even better than the sounds themselves. And in many ways, the sounds that Younge uses to make melodies and recite lyrics are better than the melodies and lyrics themselves. It’s totally backwards from just about everything else that I’ve heard, but it’s beautiful.

One complaint that I do have about this album, though, is that the lyrics hardly add anything. I mentioned that this album pursues insights on love, but pursue as it might, I don’t think it arrives at any insights whatsoever. Even though the word “love” appears in all but one of the songs on the album (not including the two instrumentals), it’s either used incredibly vaguely (what’s a “shadowy light of love”?) or in a cliché (“simple thoughts that strike the chords / make us fall in love once more”). For as obviously meticulous and deliberate as the craftsmanship of this album is, these lyrics, more often than not, are weak. It just feels like an oversight. I did appreciate the lyrics in “Stranger by the Sea,” “Come Back,” and “The Leaves,” but for every other song I would have genuinely preferred wordless singing.

That said though, the lyrics are clearly not the forefront of Voices of Gemma. The surreal, dreamlike musical journey is what intrigued me on my first impression, and it still holds my fascination after a week or so of indulging in this album. There’s such impeccable depth within this showcase of unexpectedly complementary timbres that I find myself indifferent towards its few shortcomings. This album was my first impression of Adrian Younge, and I can confidently say that, with this album, he’s made a fan out of me.

Check the album out on Bandcamp: https://adrianyounge.bandcamp.com

Check out the Facebook page for Sam’s show “Square 1” on Facebook. This review was edited by Stevie Priller of the WPTS Editorial Board.