We Have No Friends? EP by Surf Rock is Dead – Review 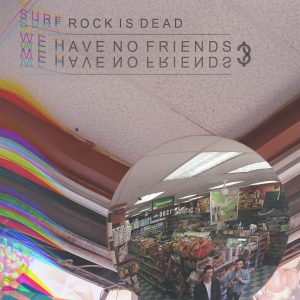 I can confirm that Surf Rock is Dead have written and recorded at least one good song. In fact, on this EP, they’ve written and recorded it five times under different titles. I jest, of course, and it’s not even a particularly bad song. The Surf Rock is Dead “sound” is just a washed-out, desaturated canvas, against which effects-heavy guitar licks can stand out the most. Kevin Pariso and Joel Witenberg, the creative duo behind Surf Rock is Dead, don’t attempt anything particularly revolutionary on this EP, but it all works. Of course, this only qualifies as praise if you consider “functionality” a praiseworthy quality, which it isn’t. There needs to be some kind of hook, and We Have No Friends? simply doesn’t have one. It’s somewhat ironic, as the EP was titled due to the duo’s tendency to stay in on weekends perfecting their sound instead of going out. That sound is present and identifiable, but the package as a whole probably would have been more appealing if Pariso and Witenberg had gone out on a few of those weekends to maybe get some more interesting lyrical subject matter for a few of these songs. Despite this, I’m kind of hopeful about this band’s future. Some acts take years to hammer out a unique and interesting sound that can be described as identifiably “their own,” and Surf Rock is Dead appear to have done so already on their first EP. Hopefully, they will only refine it more as they go forward, and, if they can gain the regular kind of personality to go along with their sonic personality, Pariso and Witenberg could see success beyond their initially encouraging Spotify numbers.

This review was edited by Spencer Smith of the WPTS Editorial Board. You can follow John on Twitter @Wright_JohnP and catch him playing the best in alternative music and rambling on conspiracy theories Fridays from Noon to 2 PM on the Post Punk Roc Bloc