“We Were Never Here” by Lucid Structure – Review 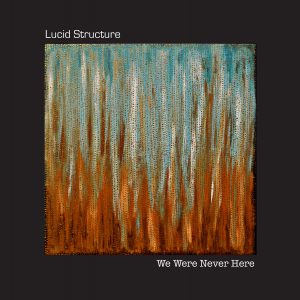 Lucid Structure’s first album is unlike anything I’ve ever heard before.  I was intrigued by the cover art – a thick black border surrounding what could be an abstract painting that has vertical streaks of blue and orange running into each other.  Listening to the first song “Together We Breathe”, I realized that I was in for an interesting and unique ride.  The first track struck me as ethereal and mysterious having no vocals at all, and the rest of the album proved to be similar.  The feel is ambient, and it almost sounds like a contemporary/ progressive spin on classical music.  The instrumentation is all there, piano and orchestral sounds on some tracks, but there’s also a lot of synth and more electronic sounds mixed with that which made for something utterly unique.  Lucid Structure is a one man show- an American composer whose childhood comprised mostly of exposure to classical music.

Lucid Structure covers a spectrum of different emotions in his songs.  “Together We Breathe” and “The Clearing” struck me as the more moody and heavier tracks, while “Like Ships in the Night” feels more stressed out.  The quieter ones reminded me a little of some of the songs on those ‘Relaxation’ playlists on Spotify, while the ramped up songs felt like they could have been the background music in a horror movie.

“We Were Never Here” is worth a listen if you’re looking for something unique and new, especially if you have an interest in a new spin on classical music.  The genre of music isn’t usually what I search for or listen to on a regular basis, but I still had a good time with this one.  My favorite part of listening to the album was looking at the names of the songs and trying connect them to the sounds.  I think he does a pretty good job of conveying his meaning solely using instrumentation.

You can tune in from Midnight to 2 AM on Mondays to hear Sandy host Midnight Tunes on WPTS Radio. This review was edited by Stevie Priller of the WPTS Editorial Board.