Weezer’s “The Teal Album”: Rivers Cuomo Why Do You Keep Doing This? – Review 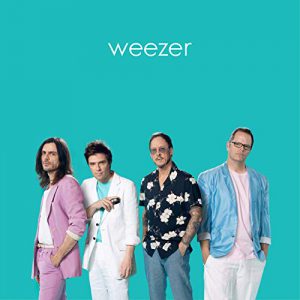 Eventually any artist simply ages out of any kind of rapport they once shared with their youthful audience, they lose the pulse of pop culture. Artists in these situations are often reduced to chasing trends rather than setting them, desperate to remain relevant to an audience that already considers them passé; the Rolling Stones tried to cut disco albums, Dee Dee Ramone began an ill-advised rap career, and now, 25 years since The Blue Album ordained them the next big thing in rock; Rivers Cuomo and the rest of Weezer have cut an album composed mostly of 80s pop covers.

Now I feel I’ve reached the point of this review where I’m meant to crack my fingers theatrically and spend the next paragraph using all the obscure adjectives and snappy metaphors I can to rend The Teal Album asunder and perform augury on its rotten innards. But there’s no need for that. Nothing here is worthy of that kind of hyperbolic scorn and indulging in it would only serve to further the very obvious game The Teal Album is very obviously playing (more on that later.)

The Teal Album is an all covers LP mostly divided into two flavors; decent classic rock covers and bad 80’s pop covers. The classic rock standards (Happy Together, Mr. Blue Sky, Paranoid) fare better than their pop counterparts (Africa, Everybody Wants to Rule the World, Take on Me). Musically, Weezer are who they’ve always been; a standard guitar/drums/bass rock band that oscillates between mediocre and great depending on the strength of their songwriting. Classics like “Happy Together” and ELO’s “Mr. Blue Sky” are right in their wheelhouse, but Rivers Cuomo lacks the vocal bombast for 80s power pop like “Take on Me” (if you listen closely on that particular track you can hear autotune on the high notes) and the rest of the band lacks the experience with synthesizers to make their pop covers sound interesting.

Most of the ten track LP checks one of the two boxes, though the last three songs are each deserving of some special mention on their own. “No Scrubs” is the sort of genuine oddball cover that Teal Album could have used more of. Cuomo whining TLC’s pop-R&B classic about catcallers and unworthy men completely unaltered is very on brand for Weezer, and the instrumentals don’t suffer nearly as much as the more electronically inclined pop tracks. “Billie Jean” is an out and out disaster that really demonstrates what a mismatch Rivers Cuomo’s singing voice is for this kind of pop music and will make you appreciate the King of Pop’s vocal talents even more on the Michael Jackson original. “Stand by Me” is notable for spoiling the iconic tune with an overly busy instrumental arrangement. This is comparable to rendering a wagyu beef hamburger inedible by wrapping it in gold leaf tissue paper.

A covers album from Weezer could have been good and indeed such an album makes sense for a band that’s been around as long as they have, but Teal Album lacks the thoughtful curation or artful adaptation that would have led to a worthwhile final product. Though more cleverly thought-out covers would have taken time and with The Black Album on the horizon for later this year, time is a resource likely in short supply for Cuomo and co.

It’s hard to conceive of any reason for Teal Album to exist other than as a joke, the fan that started this whole sorry affair on Twitter by telling Rivers Cuomo to cover Toto’s 80s hit “Africa” was likely doing it a joke. But nobody tells jokes on the internet anymore, not really; instead we post memes.

That’s the trend being chased in The Teal Album. It’s irony, meme culture, doing things because enough strangers on the internet think it would be a decent target of ridicule. That’s why I can’t bring myself to hate The Teal Album; it reeks of desperation to the point of masochism. It wants so desperately to be dunked on, to be the butt of every music joke, to be sliced into salami by some critic’s sharp tongue. It’s nowhere near bad enough to deserve that, or good as it could’ve been, or as interesting as it should’ve been, and so it ends up just being annoying.