What The Penn State Loss Means For Pitt Football 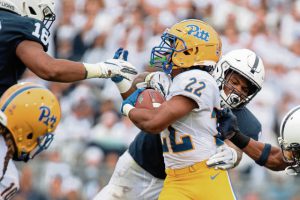 It was never going to be easy. Pitt had a tall task from the beginning as they traveled into Happy Valley and tried to walk away with a win against a heavily favored Penn State team. Pitt Head Coach Pat Narduzzi made the players go radio-silent this week as they prepared, which seemed to pay off big time.

The Panthers scratched and clawed anyway they could to win this game. Great performances on both sides of the football kept this game close throughout its entirety and it was clear that these teams were a lot closer than that 17.5 point spread would indicate.

However, after an absolute roller coaster of a game, Pitt fell 17-10 in the 100th iteration of the Pitt-Penn State rivalry game. We likely aren’t going to see this rivalry for a while, so this may leave a bad taste in Pitt’s mouth for a while going forward.

Nonetheless, this game can be a positive experience for this young Panthers team that is looking towards a bright future with Pat Narduzzi. And thus, from this game, all Pitt fans can learn some things about the team moving forward this season and next season. Here are my five takeaways from Saturday’s game.

Kenny Pickett can be THE guy moving forward

Kenny Pickett has been this mythical question mark coming into this season with new offensive coordinator Mark Whipple coming in and moving to a spread offense. No more could Pickett rely on his running backs to truly carry the entire game, he had to be able to throw the ball and push it down the field effectively. After a lackluster performance against Virginia in Week 1, those concerns only grew, but he bounced back nicely by throwing for over 300 yards against Ohio.

Last Saturday was Pickett’s best game as a college quarterback. He looked comfortable in the pocket, made big throws, and commanded the offense with confidence. Pickett compiled a career high 372 passing yards behind an absolute lethal passing attack. His playmaking ability was on another level and he was accurate all day long. His throw on the wheel route to Dontavius Butler-Jenkins was an absolute dime up the sideline.

This was the first game Pitt could have won because of Kenny Pickett. That’s a great thing to be able to say. He needs more performances like this to fully convince me, but this game showed something we have not seen out of him before. 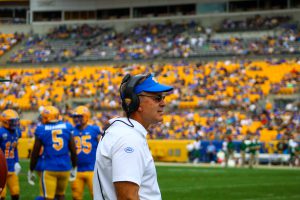 There are some other sources that you can put this loss on, but Pat Narduzzi is, without a doubt, the main reason. His decision to kick a field goal while Pitt was down by seven at the one yard line is one of the most frustrating decisions I have seen.

No coach wants to admit coming in to a game that they’re the underdog, but sometimes that mentality goes a bit too far. I think it did here. Pitt was absolutely kicking down the door on a potential win, and the only thing impeding that was their inability to actually punch the football into the end zone.

Narduzzi’s conservative style by punting on multiple 4th and 1s near midfield and kicking a field goal on the goal line caused Pitt to leave more than their fair share of points on the field, there is no doubt about it. Narduzzi has to have a cutthroat mentality and start being far more aggressive in the future. That is how you win games against the big fish.

Jalen Twyman is a stud

Five sacks through two games played. I am not sure if I actually have to say anything other than that. After the injuries to defensive linemen Keyshon Camp and Rashad Weaver, the fact that this front-four has been this dominant is absolutely insane. That speaks volumes to recruiting and coaching, of course.

Twyman, who wears the legendary #97 of Aaron Donald, is a powerful wrecking ball up front. He has shown great power and multiple moves in his arsenal already. The best part is that he is only a Redshirt Sophomore and can only go up from here.

Pitt is blessed to have a great talent in Twyman, who can legitimately be an NFL prospect if he keeps his current pace and tape up.

Paris Ford is something else

As good as Jalen Twyman was, I would argue the best player on the defense Saturday was Junior safety Paris Ford. Pushing for playing time for the last couple of years now, Ford’s call has finally been answered, and he looks like a fantastic player.

Ford is fast, instinctive, and always making a play. He missed zero tackles and racked up 11 total tackles against Penn State, and he could have had an interception if a questionable pass interference call had not been called.

Ford and fellow defensive back Damar Hamlin have been a formidable duo already, but it’s Ford’s immediate impact and athleticism that has made so much of a difference on the perimeter and in the middle of the field up the seam. Ford has been fantastic.

This team can be competitive moving forward

Pitt did what no Power 5 team should do — they stacked their out of conference schedule with tough teams and teams that are tough outs week in and week out. That is going to skew their early record in a non-favorable position no matter how you slice it.

This team is better than most of the current 1-2 teams in the country. But come ACC conference play, the Panthers schedule certainly does level off and get a bit easier. Duke, Syracuse, Georgia Tech, Boston College, Miami, Virginia Tech, and North Carolina are all winnable games. Very winnable games at that.

Pitt is the type of team that if they play at this level with semi-decent coaching, they can absolutely shred this schedule. It is not out of the realm of possibility for them to rip off five straight wins in conference play. This team is a solid team, that much is certain.

So, don’t be pessimistic about this loss, it was a hard fought loss that actually can give fans hope for the rest of the season.

Looking ahead to UCF

Yeah, another tough game for the Panthers. UCF quarterback Dillion Gabriel has proven to be a fantastic passer even though he is only a true freshman. With other talent such as Richie Grant on the defensive side of the ball, this is a dynamic UCF team that can go toe-to-toe with any of the Power 5 teams out there.

The Panthers are going to have their work cut out for them this week. They have to be aggressive, flawless, and more importantly, clicking on all cylinders offensively. They might need a few more Taysir Mack circus catches, but it is going to be a fight until the end.

Regardless of the result of the game, the future is bright for Pitt football. 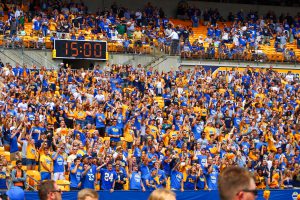