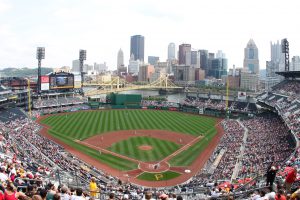 The average baseball game is 3 hours and 5 minutes long. 297 pitches will be thrown during that game, and only 74 of those pitches, or 25%, result in a ball being hit in fair territory. Unlike football, where every down matters, every pitch does not matter. With hockey and soccer, at least there is an offensive zone, and they can take a shot at any moment, requiring a focus at most times during the game.

They say that baseball is the thinking man’s game. I say baseball is the boring man’s game. Baseball seems to be a place where people go to conversate as opposed to actually focusing on the game. Baseball has been, in my experience, the one sport where I’d be better off not going to watch the game than going. This is why I have passed up free tickets on more than one occasion. There is no atmosphere at a baseball game like there is at a soccer, hockey, or football game. I have seen an RMU hockey game with more excited fans than any baseball game I have been to. The large gaps between meaningful plays have resulted in a drop of 4.2% in attendance in the last year alone. Soon, soccer will replace baseball as the 4th sport in the U.S. behind football, basketball, and hockey.

What was once the nation’s pastime has become the nation’s bathroom break. Even the CTE scandal in football cannot save this sport that is comparable in excitement to an episode of The Joy of Painting with Bob Ross. Baseball will soon go the way of the Do-Do bird. Not because people nowadays aren’t thinking enough as many baseball fans would like you to believe, but rather because baseball has become outdated.