“Where Owls Know My Name” by Rivers of Nihil – Review 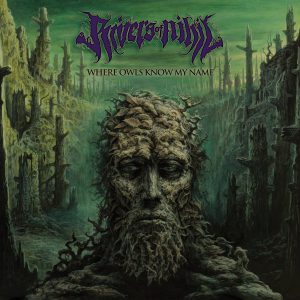 Rivers of Nihil is a technical death metal band from Reading, PA signed under Metal Blade Records from Los Angeles, CA. With two records already under their belt, Where Owls Know My Name is an ambitious album that is more progressive and genre-defying than previous releases. The record is the third in a four-part concept representing the four seasons. The first represented spring, the second summer, and this third album, autumn. The beautiful cover art by Dan Seagrave displays this season vividly, but the album does a great job of capturing the feeling of autumn as well.

The two-minute opening track, “Cancer / Moonspeak,” starts the album off with ambient keyboards and clean vocals. While keyboards have been used in their past releases, this is the first moment in which the band lets the keys take center stage. The clean vocals are also completely new, and they sound great. The opener does a great job to set a mood and let the listener know this isn’t your everyday tech death album.

The second track, “The Silent Life,” is a powerful track that features a heavy rhythmic backbone with atmospheric guitar lines over top. Halfway through, the song slows to make way for the bass and a saxophone solo. The saxophone is featured on three other tracks as well, and it’s the inclusion of these slower, jazz-inspired passages that really push the boundaries of what tech death can be.

“A Home,” the third track on the album, is my favorite. It features dynamic drumming by new member Jared Klein, and Adam Biggs does a superb job of creating complex yet catchy bass lines that add so much to both the rhythmic and melodic sides of the song.

The band also pushes the boundaries of the tech death genre by including elements of electronica in their music, such as in the instrumental track “Terrestria III: Wither.” The track features saxophone, cello, and trumpet, but the most prominent piece of the music is the heavy synthesizers that give the song a futuristic and ambient feel.

Where Owls Know My Name is a fantastic record from front to back, and shows that the band is growing and progressing with each release. This album will be competing for metal album of the year in my book. It pushes a forward a genre that has seen so many uninspired and “safe” releases. Where Owls Know My Name is nothing but inspired and packed full of emotion, and I eagerly look forward to where the band will go next.

This review was edited by Sean Bailey of the WPTS Editorial Board.