“Why Hasn’t Everything Already Disappeared?” by Deerhunter – Review 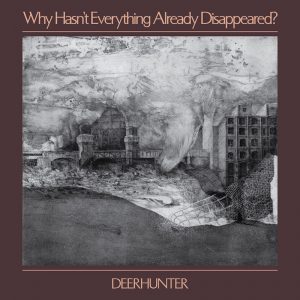 Three years ago, I saw Deerhunter for the first time. They were introduced by a long instrumental without any sign of their front man, Bradford Cox, anywhere on stage. Suddenly, there he was. The abnormally tall and lanky man walked out holding onto a huge cane draped in a giant trench coat. He almost looked injured in the way that he hobbled out onto the small stage at Mr. Smalls Theatre, and then he threw away his cane and dropped the coat on the ground and went straight into the lead single from their last album, Fading Frontier. That show was incredible, and it was made unforgettable by Bradford Cox. Deerhunter has always had a rotating lineup—both on stage and in the studio—but the one constant has always been him. This new album, Why Hasn’t Everything Already Disappeared, is uniquely Bradford without being autobiographical.

My love for this album may be a bit biased since I think Deerhunter has set in stone their ability to be one of indie rock’s most interesting bands. I think the appeal of present day Deerhunter stems less from a unique sound but more from incredible songwriting and the ability to make strange sounds incredibly accessible. Each of their albums does this to some degree, and they have been becoming more and more pop-oriented since their largest critical success in Halcyon Digest. Their last album had songs that were straight indie-pop bliss, like “Living My Life,” and they have somewhat continued this on the new album. Songs like the third single, “Plains,” have an incredible chorus and will be stuck in your head for hours to come. Other songs like “What Happens to People?” have incredible builds throughout that lead to very interesting instrumental passages. Working with producer Cate Le Bon on this album has added some new sounds that Bradford had not explored before. Album opener “Death in Midsummer” sounds classically Deerhunter yet it uses a harpsichord, an instrument that they have never explored before. These unique sounds turn up all over the album, most interestingly in “Détournement.” With its spoken word lyrics, it sounds like an interlude, but I absolutely love the electronic ambiance in the background that continues to build with guitars and kick drum throughout. On headphones this song sounds incredible and may even be my favorite on this album. The accessibility of the rest of the songs makes Why Hasn’t Everything Already Disappeared a really fun and quick listen. Almost every song on here is classic Deerhunter, and while some may find that to be unexciting and maybe not that novel; I love it.

Deerhunter have cemented their place in the canon of indie rock in the last decade. This album is a great listen and I recommend it to any fan of the genre. I hope that others enjoy just as much as I have.