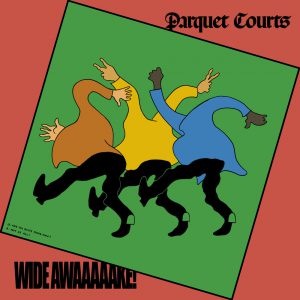 Andrew Savage and the rest of Parquet Courts continue to soar to new heights in their continuing saga of a rock band from Texas come to New York in search of big city fame, prestige, and that all important hipster cred. Their last proper release, 2016’s Human Performance, had that in spades, and deservedly was the band’s strongest work in ages. Human Performance is a supreme work of dazed, stoned, and discontented Brooklyn millennial opacity that felt like the band changing gears and heading in a more mature direction. They showed rumblings of this new, more grown-up Parquet Courts sound on last year’s excellent collaboration MILANO with Yeah Yeah Yeahs frontwoman Karen O and composer Daniele Luppi, but I’m happy to say they’ve delivered in full on all that promise with 2018’s Wide Awake!

Wide Awake! is the album I’ve been waiting for Parquet Courts to make since I don’t even know when. This is an endlessly inventive polymath of an album that flits effortlessly from Wire-esque stripped down guitar music, to Talking Heads’ pseudo-funk, to full-on protest music in the Crosby, Stills, Nash & Young mold, and back to the same “Americana punk” you’ve come to expect from a Parquet Courts release. The message is clear, at least to my ears; this band has the chops to be anyone they want to, but they’re best at being Parquet Courts. What exactly “being Parquet Courts” means hasn’t fundamentally changed that much over the years. If you like listening to compact, up-tempo, hook-y guitar music while Andrew Savage yells occasionally meaningful verbose witticisms and the rest of the band sing/talks about something else entirely then you’ll probably like Wide Awake!

Let’s dispense with all the endless genre hyphenates of modern music and state a simple fact; this is an honest-to-god great rock album in the year 2018. Particular standouts include the Tom-Brady- dissing “Total Football,” the aforementioned protest song “Before the Water Gets Too High,” the uber-energetic title track, and the two-songs for the price of one combo of “Almost Had to Start a Fight/In and Out of Patience” which may be some of the band’s best work to date.

I’ll admit, to my slight embarrassment, that the obvious political connotations of “Wide Awake!” (read: woke) weren’t obvious to me until I’d actually listned to the album in full. Like any good punk band Parquet Courts has been an intermittently political entity since it’s conception, so it’s perhaps unsurprising that they’re able to carve out a niche for themselves in the growing parade of bands doing their “post-2016 election” album. The band takes no obvious political stances beyond a kind of plea for egalitarian decency to one’s fellow man (“like a junkie goin cold I need the fix/of a little tenderness”) and a kind of introspective left wing musing on the crises of our time. This works for me, it comes off as subtler, and avoids the trap of empty vulgarity which always seems like it’s looking to score brownie points with the kind of people who can think of no better way to lampoon a man so inherently ripe for parody as Donald Trump than to insinuate that he’s gay for Vladimir Putin. In short, for A. Savage the symptoms may be national in scale, but the problem is within each of us.

I’m prepared to concede that this kind of arms-length politicking won’t hold water for everyone. It’s easy to conceive of a listener who views Parquet Courts sudden greater-than-ever focus on political subjects and themes as a cynical ploy to cash in on activism as a trend. Or worse, views the use of a national crisis for some Brooklyn rocker to wax philosophical about “the age of tenderness” as profoundly self-centered. I will even admit that “Tenderness” come off as a bit too saccharine for its own good if nothing else, however “Before the Water Gets too High” is a truly great piece of modern protest music that comes from a place of real contemplation and reflection.

I’m running short on things to say on Wide Awake! because I’m not really sure what else I can say to get you to go listen to what will surely be one of the albums of the summer if not one of the albums of the year for me. The question now is whether this will finally be the apex for Parquet Courts or if there’s another level beyond this. Suffice it to say, this band’s history points firmly to the latter option.

You can follow John on Twitter @Wright_JohnP and tune in on Fridays from 5 to 6 PM to hear him host Jet Set Radio on WPTS Radio. This review was edited by Spencer Smith of the WPTS Editorial Board.