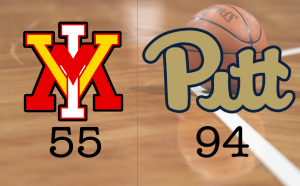 The Pitt men’s basketball team made easy work of VMI Friday night, dominating the Keydets en route to an easy 94-55 victory to improve to 2 and 0 for the 2018-19 season.  The 39-point victory margin was the largest for Pitt since the Jamie Dixon era. Jared Wilson-Frame was the leading scorer for the blue and gold with 20 points on 6 of 10 shooting in 23 minutes.

The Panthers opened up to a 21-5 advantage in the first ten minutes of the contest, sparked by three three-pointers from Wilson-Frame.  The senior thrived in his season debut after sitting out Tuesday’s game against Youngstown State due to a violation of team rules. Coach Jeff Capel also showcased Pittsburgh’s depth throughout the game’s early stages as 11 Panthers saw the floor in the first ten minutes.

The three point shot carried Pittsburgh to its substantial first half lead, heading to the break with a 42-24 advantage after shooting 7 of 12 from beyond the arc.  The shooting display was particularly impressive following a 2 of 11 shooting night on Tuesday. The Keydets, meanwhile, struggled to connect in the first half, going just 9 of 27 from the field.

The Panthers continued to prowl in the second half, opening with a 19-3 run to quickly increase their lead to 61-27 just five and a half minutes in.  They coasted through the final fifteen minutes to defeat VMI by a final score of 94-55. Pitt outmatched the Keydets in nearly every statistical category, including an encouraging 29-3 bench points advantage.

Xavier Johnson tallied his first career double-double, posting 14 points and 10 assists on the night, while Au’Diese Toney also enjoyed a solid performance in his second game with 14 points and eight rebounds.  Their freshman counterpart in the backcourt, Trey McGowens, followed his team-leading display on Tuesday with a quiet four-point showing against the Keydets. Bubba Parham led VMI with 16 points on 6 of 16 shooting.

Pitt (2-0) resumes action Monday night at 7 against Troy (1-0), while the Keydets (1-1) travel back home for a Sunday afternoon bout with Goucher.