“Without Control” by Greywalker – Review 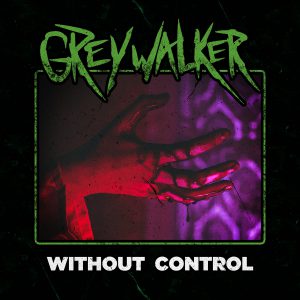 Over the past few years, Pittsburgh has been fortunate enough to have had the spotlight come onto its rich and diverse metal and hardcore scene based on the success and grit of bands such as Code Orange. Since their 2011 EP The Honesty, Pittsburgh’s own Greywalker has carved a path of their own with an impressive take on melodic-death metal. After a three year break between releases, Greywalker have returned with their second full-length in the form of Without Control.

Pulling on influences such as In Flames and Dark Tranquility, Greywalker starts Without Control off with a bang with the crushing “Your Sins.” After a small buildup, the recognizable guitar conventions of melodic-death metal come into play. The song is marked by impressive instrumental work and an absolutely infectious chorus driven by dual guitar leads. Interestingly, the song does not feature a guitar solo, but instead utilizes a hefty breakdown. While Greywalker aren’t exactly doing anything altogether new, “Your Sins” is well-done and avoids feeling simply average.

What is pretty interesting is that the next few songs, such as “Beyond the Glow,” the title-track, and “Dark Waters” feature instrumentation that is incredibly reminiscent of the New Wave of American Heavy Metal bands such as Killswitch Engage and God Forbid. This feels like melodic-death metal with a bit more of a hardcore twist to their sound; it’s not quite hardcore enough to be metalcore and too hardcore to be really taken as straightforward melodic-death metal. The balance between the styles provide some variety in the album’s runtime. The first half of the record features some really memorable riffs, breakdowns, and fun dual guitar work.

As is the case with most melodic-death metal bands, by the time the later tracks start making their way into rotation, things start to sound the same. The music is far from boring but it also can find itself to be rather indistinguishable from the rest of the songs on the album. Luckily, “Hollow Days” features clean vocals provided by the talented Carly Simon-Werneke of Defy the Tide. “Hollow Days” provides a breath of fresh air to Without Control and allows for a small palate cleanser part way through the album.

While the album does lull towards the middle, it does an impressive job of ending on some of its best aspects. Tracks such as “Awakening” and album closer “The Wolf and I” are both crushing and incredibly catchy. The guitar lines throughout these songs respectively are some of Without Control’s most memorable moments. This album is able to bookend itself with two of its best tracks, which is both impressive and incredibly satisfying.

It is important to note that this album is far from perfect. As earlier-mentioned, when this album begins to reach the middle, songs begin to sounds the same and differentiating between tracks can become a little tedious. In addition, there is not an exceptional amount of variety on the album. It feels very much like a strong take on the melodic-death metal inspired metalcore movement of the late 1990s and early 2000s. While “Hollow Days” does provide distinction in the album’s structure, it can’t really save things from feeling similar. It’s simply a weakness within the genre that Greywalker really can’t navigate past.

Greywalker is an incredibly talented group. The skills to both produce imaginative and fresh guitar lines coupled with solid song structures is definitely something to note. With a 42 minute long runtime, nothing really drags on for too long. In addition, the vocals have enough variety that they don’t begin to feel like a chore; they can have serious bite when the time calls for it and it’s incredibly fun when those parts make their appearance. No, Greywalker are not reinventing melodic-death metal on Without Control, but the band does stand on their own when compared to other contemporaries in their genre. As a band, they have a lot of talent and potential, and it’s going to be incredibly exciting to see how they continue progressing in regards to their songwriting. Moving forward, Pittsburgh has a lot to look forward to from Greywalker. The future looks incredibly bright for Greywalker if they can continue on the path that they’ve laid out for themselves.