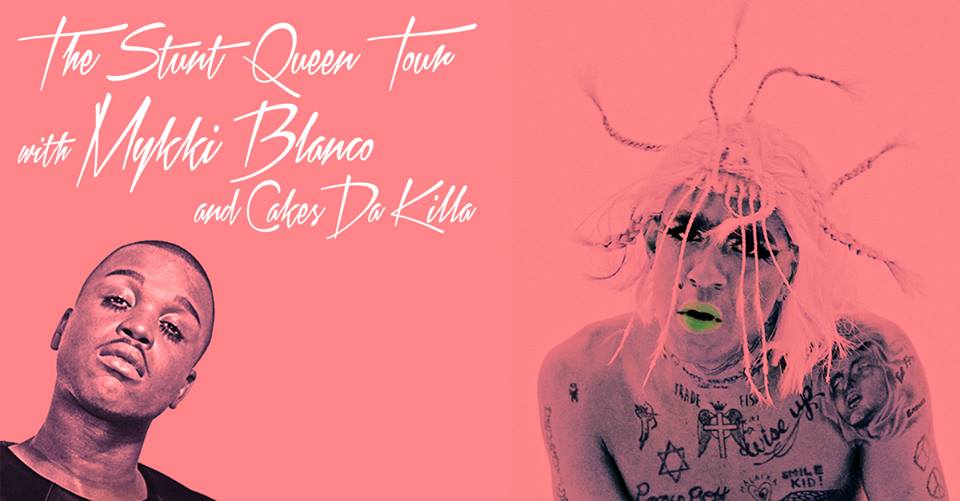 WPTS Radio and Drusky Entertainment Present The Stunt Queen Tour with Mykki Blanco and Cakes Da Killa! You can see the 2 artists on Thursday, February 16th at Cattivo. Doors open at 8:00 PM with music starting at 9:00 PM. Snag your tickets to the show here.

Mykki Blanco (born Michael David Quattlebaum Jr) is a writer, activist and international performing artist. In 2010 Quattlebaum first began making crushing industrial punk under the moniker No Fear before beginning a video art project that would grow to be the glamorous riot grrrl rap of Mykki Blanco.

In 2012, Mykki burst into the music scene with the ‘Mykki Blanco and the Mutant Angels’ EP. Later in 2012 Blancodropped the seminal ‘Cosmic Angel Mixtape’, that featured Mykki’s first wave of hits ‘Wavvy’, ‘Haze Boogie Life’ and ‘Kingpinning’.

On May 21, 2013 Blanco released his second work ‘Betty Rubble: The Initiation’ EP. In January of 2015 Mykkipartnered with !K7 to create her own imprint DOGFOOD Music Group, a label that aims to give voice to underground artists that share her vision and “transcend conventional cultural boundaries / constructs.” The first DMG release titled C-ORE, a new compilation project, was out on Sept 18. Mykki is currently working on her solo album.

Rashard Bradshaw, better known as Cakes da Killa is an American rapper based in New Jersey. He is an emerging artist in the LGBT hip hop genre along with fellow artists such as Le1f, Mykki Blanco and House of Ladosha. He has recently gained popularity through media interest in LGBT figures and themes in hip hop, having been recently written about in a Pitchfork article about said movement. In May 2013, Bradshaw completed his Bachelor’s degree at Montclair State University.

Check out “Loner” from Mykki Blanco below.