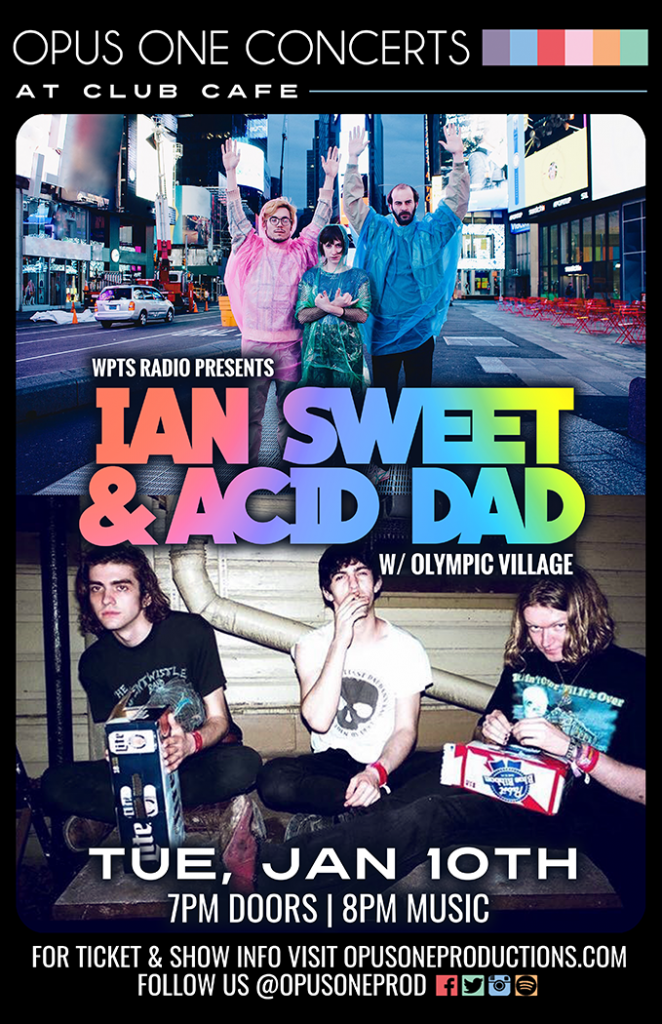 WPTS Radio and Opus One Productions present Ian Sweet and Acid Dad with special guest Olympic Village! The two acts will be coming to Pittsburgh on January 10th at Club Cafe. Doors open at 7:00 PM and tunes start at 8:00 PM. Snag your tickets for the show here

“I have a way of loving too many things to take on just one shape,” Jilian Medford sings over and over again on the title track of the Brooklyn-based band IAN SWEET’s debut album, Shapeshifter, repeating it like a mantra. This is Medford’s thesis statement, a narrator to carry us through Shapeshifter, which is above all else a meditation on loneliness and displacement. It’s about losing love and your sense of self in the process, about grabbing at the little things in life that bring joy when nothing else is going according to plan. It’s also an ode to the bandmates, and the friends, that see you through. On Shapeshifter, IAN SWEET prove that there is no one absolute; just the ease that comes with knowing everything will be OK as long as you hold tight to the pocket-sized things in life that bring happiness while you watch the rest of your world fall apart in slow-motion.

Brooklyn, NYs Acid Dad will release their debut EP, Lets Plan A Robbery, on February 26th, 2016. Fools Gold, the first track off the EP, premiered on Stereogum this morning, calling it a kaleidoscopic, rebellious tune, capturing the buoyant feeling of city shenanigans; the song can also now be streamed and shared via Soundcloud: https://soundcloud.com/aciddadnyc/fools-gold-un-mastered. The EP has gotten early praise from Newsweek, which named it one of the Nine February Albums We Cant Wait To Listen To, and will also be released as a limited edition cassette tape via Knife Tapes.

Check out Ian Sweet’s video for “All Skaters Go to Heaven” off of Shapeshifter: