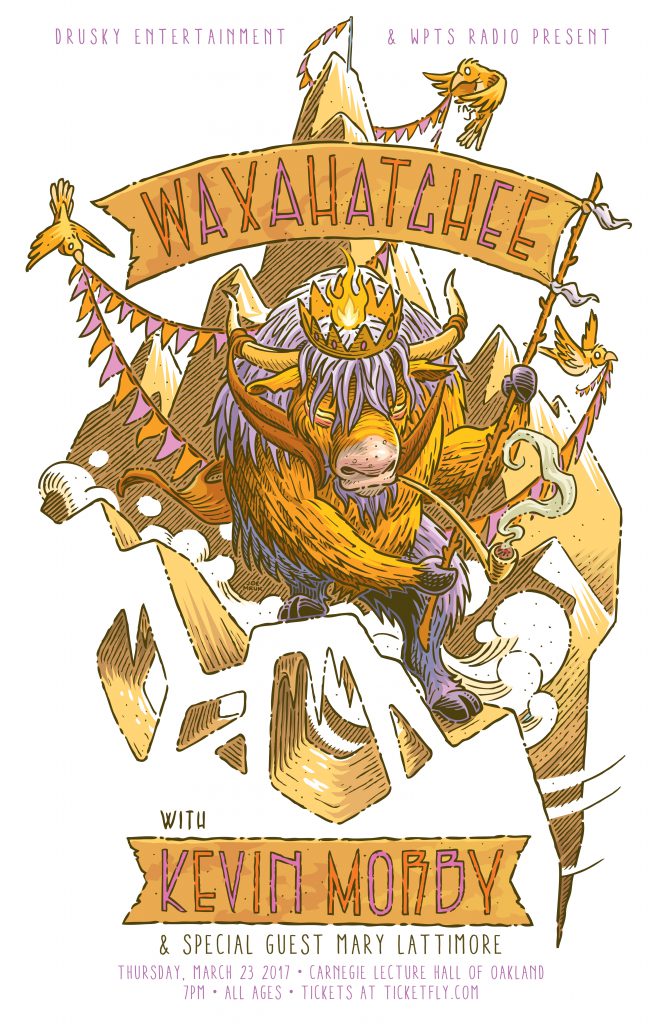 WPTS Radio and Drusky Entertainment present Waxahatchee and Kevin Morby with Mary Lattimore! You can see the artists on Thursday, March 23rd at the Carnegie Lecture Hall in Oakland. Doors open at 7:00 PM with music starting at 8:00 PM. Snag your tickets to the show here.

Katie Crutchfield’s southern roots are undeniable. The name of her solo musical project Waxahatchee comes from a creek not far from her childhood home in Alabama and seems to represent both where she came from and where she’s going. Since leaving home, Crutchfield has drifted between New York and Philadelphia but chose to return to Alabama to write her first two albums: American Weekend, her debut filled with powerful lo-fi acoustic tracks full of lament, and Cerulean Salt, a more developed and solid narrative about growing up. Both are representations of a youthful struggle with unresolved issues and unrequited feelings.

Waxhatchee’s latest record, Ivy Tripp, drifts confidently from these previous albums and brings forth a more informed and powerful recognition of where Crutchfield has currently found herself. The lament and grieving for her youth seem to have been replaced with control and sheer self-honesty. “My life has changed a lot in the last two years, and it’s been hard for me to process my feelings other than by writing songs,” says Crutchfield. “I think a running theme [of Ivy Tripp] is steadying yourself on shaky ground and reminding yourself that you have control in situations that seem overwhelming, or just being cognizant in moments of deep confusion or sadness, and learning to really feel emotions and to grow from that.”

Recorded and engineered by Kyle Gilbride of Wherever Audio at Crutchfield’s home on New York’s Long Island—with drums recorded in the gym of a local elementary school—Ivy Tripp presents a more developed and aged version of Waxahatchee. “The title Ivy Tripp is really just a term I made up for directionless-ness, specifically of the 20-something, 30-something, 40-something of today, lacking regard for the complaisant life path of our parents and grandparents. I have thought of it like this: Cerulean Salt is a solid and Ivy Tripp is a gas.”

Crutchfield is accompanied by both Gilbride and Keith Spencer on Ivy Tripp, and the record was produced by all three of them. With the addition of more guitar work, piano, drum machines, and Crutchfield’s vocals in full bloom, we are given a record that feels more emphatic and pronounced. Ivy Tripp opens with “Breathless,” filled with only a distorted keyboard and layers of vocals, showcasing Waxahatchee’s pension for quiet, personal reflection. The record then opens up into “Under a Rock,” a quicker guitar-driven song that lays the foundation for the rest of the album, which as a whole resonates with strong, self-aware lyrics, energetic ballads, and powerfully hushed moments of solitude. Crutchfield’s voice is certainly the guiding force behind Ivy Tripp—commanding and voluminous in the rock song “Poison,” candied and pure in the frolicking “La Loose”—gripping you tightly and then softly releasing you into the wilds of emotion.

As far as her goals with Ivy Tripp, Crutchfield says, “I heard someone say that you have to be the change you want to see. I just want to be the kind of musician I want to see in the world. I want to present myself in a way that reflects that.”

Check out “Ls Loose” from Waxahatchee below.