WPTS Radio and Opus One Productions Present Minus the Bear 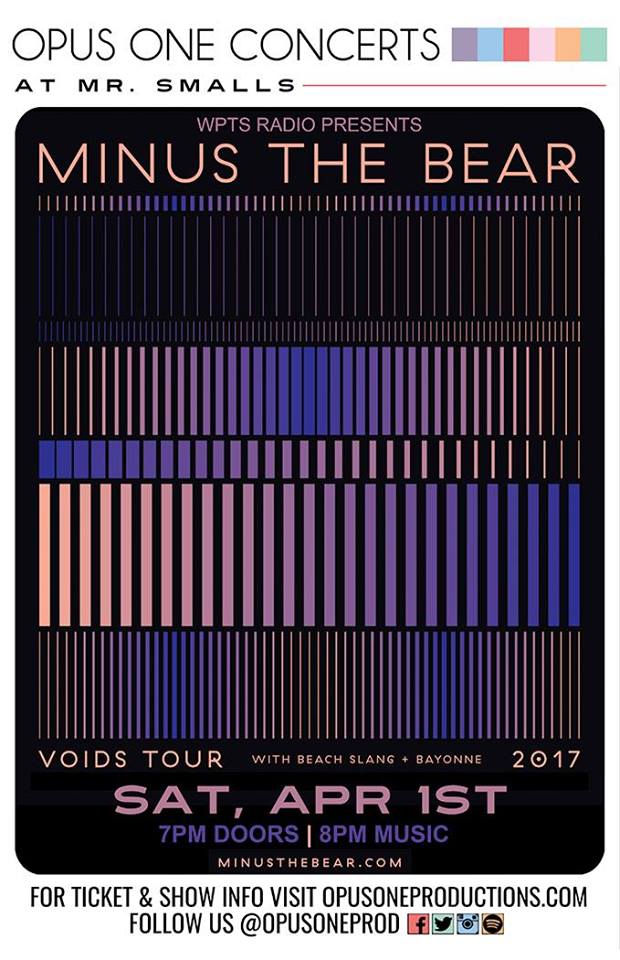 WPTS Radio and Opus One Productions present Minus the Bear with Special Guests Beach Slang and Bayonne ! You can see the band this Saturday, April 1st at Mr. Smalls Theatre. Doors open at 7:00 PM with music starting at 8:00 PM. Snag your tickets to the show here.

Over the course of their 15-year career, Minus the Bear have carved out their own unique musical world. This isnâ’t to say they’re impervious to outside influence. They’ve borrowed components from a wide swath of genres the brainy clangor of New York’s proto-punk scene, the cerebral buzz of IDM, the poptimist evaluation of hip-hop and R&B, and the grandiose visions of prog rock but always managed to defy classification. Throughout the first decade of their existence, every new album offered a new musical approach, as seen in the idiosyncratic fret board gymnastics of Highly Refined Pirates, the glitchy loops of Menos el Oso, or the modernized Fripp-inspired wizardry of Planet of Ice. By the time the band entered our current decade, their knack for reinvention yielded to an emphasis on refinement. Albums like OMNIand Infinity Overhead searched for a middle ground where their myriad of stylistic approaches could all work within the context of a single record. On their sixth album VOIDS, Minus the Bear started with a blank slate, and inadvertently found themselves applying the same starting-from-scratch strategies that fueled their initial creative process. There was a lot of change and uncertainty, says guitarist David Knudson. I think the general vibe of emptiness, replacement, lacking, and longing to fill in the gaps was very present in everyone’s minds. Change was everywhere. Keyboardist/vocalist Alex Rose took on a more prominent role in composition and handled lead vocal duties on songs like âCall the Cops, Tame Beasts, and âRobotic Heart, drummer Kiefer Matthias joined the fold, producer Sam Bell lent a fresh set of ears in the studio, and the band returned to their original label home at Suicide Squeeze Records. Minus the Bear were no longer swept along by the momentum that had driven them for the last fifteen years. Instead, they reached a point where they could recalibrate and redefine who they were as a musical entity. The resulting album VOIDS retains many of the band’s signature qualities the hedonistic tales of nighttime escapism and candid vignettes of adulthood, the savvy up-tempo beats, the layered and nuanced instrumentationâ while simultaneously reminding us of the musical wanderlust that initially put them on the map. Album opener Last Kiss immediately establishes the band’s renewed fervor. An appropriately dizzying guitar line plunges into a propulsive groove before the chorus unfolds into a multi-tiered pop chorus. From there the album flows into Give & Take, a tightly wound exercise in syncopation that recalls the celebratory pulse of early Bear classics like âFine + 2 Pts while exploring new textures and timbres. Invisible is arguably the catchiest song of the band’s career, with Jake Snider’s vocal melodies and Knudson’s imaginative guitar work battling for the strongest hooks. What About the Boat? reminds us of the math-rock tag that followed the band in their early years, with understated instrumentation disguising an odd-time beat. Erase, recalls the merging of forlorn indie pop and electronica that the band dabbled with on their early EPs, but demonstrates the Bear’s ongoing melodic sophistication and tonal exploration.

Check out “Invisible” from Minus the Bear below.