WPTS Radio is proud to present Real Estate on Wednesday, October 1st at the Altar Bar with special guest Regal Degal. Doors open at 7 PM with the show starting at 8 PM. This show is a part of VIA Fest 2014. You can find out more about VIA Fest here!

New Jersey’s hazy indie rockers Real Estate feature Titus Andronicus’ Martin Courtney, Etienne Duguay (who also records as Predator Vision), Alex Bleeker, and Matthew Mondanile, also of Ducktails. The foursome had played together in bands — including a Weezer cover band — during high school, but didn’t become Real Estate until Courtney returned to the Garden State after attending college in Olympia, Washington. After forming in summer 2008, the band began playing live that fall and released the Suburban Beverage 7″, which introduced Real Estate’s brand of surfy, lo-fi pop, early in 2009. A song on the Underwater Peoples Records Showcase and the Fake Blues EP appeared that summer; the band spent the fall touring with Girls before its self-titled debut was released by Woodsist. The quartet joined the Domino Records roster in 2011 for its sophomore album, Days, which hit the shelves that fall. Shortly following the album’s release, the band went through a line up change with Duguay dropping out, being replaced by drummer Jackson Pollis. The group was also joined at this point by auxiliary member Jonah Maurer on keyboards and additional guitars. This new assemblage of Real Estate toured feverishly on the incredibly well-received Days, though by their return in 2014 with third album Atlas, Maurer had been replaced by Matt Kallman. 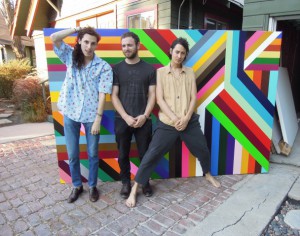 Regal Degal is a power trio consisting of Josh da Costa on guitars and vocals, Josiah Wolfson on bass, and Jamen Whitelock on drums. Formed in Brooklyn in late 2009, the group relocated to Los Angeles for a year, to finally come back to home in Brooklyn.

The group’s sound pulls omnidirectionally from across the musical spectrum, drawing from post-punk, krautrock, 60’s psychedelic/freakbeat, 80’s new wave and indie, German minimal house, and the music of Africa.