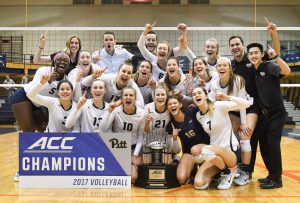 With Oregon State’s victory in the College Baseball World Series this past week, the 2017-18 college athletics season has reached the finish line. Even though the last Pitt team wrapped up weeks ago, there’s no better time than now to look back at this turbulent year.

In terms of revenue sports, this was easily a year to forget. Pitt football finished their campaign five and seven and failed to reach a bowl game. On a positive note, it ended on one of the best moments in recent history with an upset over Miami, the second-best team in the nation. However, this massive win was too little too late. The team certainly had their chances as three of their last four losses were decided by seven points or less. Despite great moments, a season full of miscues and injuries felt like a disappointment to most fans.

As fall transitioned into winter, things only got worse for Pitt’s revenue sports. Kevin Stallings’ (former) squad made the football season look like a walk in the park. The men’s basketball team was the laughing stock of college basketball going through conference play without a single win. They struggled to even look competitive in the ACC losing 12 of their 18 games by double digits. The closest thing to a signature moment this season had was a nine-point loss to West Virginia in a primetime matchup at the Pete.

Based solely on revenue sports, a combined record of 13 and 31 would classify this year nothing short of a failure. But, as the saying goes, when one door closes another one opens. While these two teams struggled, the rest of Pitt athletics picked up the slack.

Men’s soccer, under coach Jay Vidovich, had their best season in recent history. They beat three nationally ranked teams including their first ever win in the ACC over #21 Syracuse and a road upset over #7 Notre Dame. Most importantly, the Panthers will be returning most of their roster as they will look to continue their success.

Pitt baseball also had one of their best seasons in recent memory. They finished with the most wins in a single season since 2013, the most conference wins since joining the ACC, and concluded with their first trip to the ACC tournament. Led by strong pitching and timely hitting, the Panthers shined in the postseason with upset wins over Georgia Tech and top-seeded North Carolina.

On the other side of the Petersen Sports Complex in the spring, the Pitt softball team became an ACC powerhouse. Despite being projected to finish ninth in the conference, the team would go on to win their first ACC Coastal division title with a 33 and 18 overall record and a 16 and 6 conference record. The stellar campaign was certainly rewarded as head coach Holly Aprile won ACC coach of the year, while Giorgiana Zeremenko and Kayla Harris won first and second team All-ACC honors respectively. The tremendous season was cut short by a heartbreaking loss to the eventual National Champions, the Florida State Seminoles, in the ACC title game. After the loss, the squad was controversially left out of the NCAA Tournament. Despite the ending, this season will certainly go down in the record books.

Finally, the pinnacle of this season was absolutely Pitt volleyball’s historic championship campaign. Led by ACC Coach of the Year Dan Fisher, the Panthers finished their slate with a 25 and 6 record. They steamrolled through the ACC with a nearly perfect conference record of 18 and 2 with wins over top programs such as Florida State, North Carolina, and Notre Dame. On November 25th, the Panthers stomped out Virginia, clinching a share of the ACC regular season title, the university’s first. With tons of national accolades, the success didn’t end in the regular season as they were invited to the NCAA Tournament for the fifteenth time in program history. They would go on to beat VCU in the first round before falling to the top seed Penn State. Most importantly, this was coach Fisher’s youngest team at Pitt with the majority of his roster eligible to return. This amazing season could be the beginning of something truly special.

In conclusion, this year was truly a rollercoaster for Pitt athletics. If it has taught us anything, it’s that success can come in many different forms. During this upcoming year, you may want to make a trip to the Fitzgerald Field House or the Petersen Sports Complex. You may just see the next great moment.