“Yes and No” by Anna McClellan – Friday Featured Review 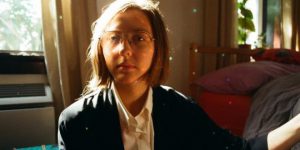 Indie Pop is a term that is often used, but is never well defined. Anna McClellan is considered indie pop due to her perfect piano driven songs, that are catchy and fun while remaining musically interesting. Her voice is a little off-putting because it’s not what we are trained to think of as “beautiful”, but it works perfectly with her songwriting style. “Yes and No” is a record of crossroads; it’s a little unsure of what it is, yet every song is a work of art. McClellan wrote the record on a “road trip”, or during a period where she had no home and stayed with friends in various cities. The album is also focused on the idea of relationships being a way for humans to distract from our lives and ignore our problems.

“Yes and No” begins with “Flailing Orbits”, a song about clashing personalities represented by astrology signs. The song is fun and folky, and is one of the most poppy songs from the album. “Heart of Hearts” contains a beautiful build from slow piano to a fuller sound, as well as an interesting change in time signature. This track got me quite excited and intrigued for this albums release, and did not disappoint. “Look Alive” initially feels like a song off of McClellan’s last album, until a violin evolves into a light and pretty melody that transforms into a frustrated sound. “Look Alive” is about feeling lost and confused by life, yet at the same time is a nice piano ballad most reminiscent of her last album when paired with the lighter sound embodied by the lyric “you left without looking back”. “Happy Type” is a song that is reminiscent of early Angel Olsen. This track hits very close to home and is about being frustrated by people not understanding what it feels like to not be happy. I relate most to the lyric“can you make me a happy person? That’d sure be nice”, and love it when paired with the heaviest guitars on the record. Holding On Too Tight is a waltz, in which McClellan questions if a relationship is only in her head or if it is real. This is reflected in McClellan lyrics “But I really wanna know is if how I feel / Is only in my head / Or is it real?”. The third and final single, Nail-Biting Song, shocked me when it was released due to the fact that it’s eight minutes long and is a work of art. This song exemplifies what I find anxiety to feel like. The song is constantly changing with no chorus, the lyrics are her thoughts as they go through her head. I love everything about it. “It just makes sense” that the second to last song is the most frustrated song on the album. Mclellan is angered by her words getting mixed up and her brain being filled with “bullshit and ass”. Shit’s in the Stars is the perfect closer: a song about meeting people in bars and questioning if it’s meant to be. Shit’s in the Star’s has an intense, full sound and plays like a classic folk song on steroids, from the way it changes to the bridge being really cool and unique-especially compared to the rest of the song.

Overall, I feel Yes and No is is not at all stereotypical, prominently featuring experimental melodies in a way indie pop  rarely does. It features a female vocalist that is a little more blunt that expected, especially when McClellan’s lyrics are so personal and heart wrenching. It’s an album that is so distinct, especially with the addition of drums and guitar since her last album . In the end I felt Yes and No was a very strong and beautiful record. Listen if you like Sharon Van Etten, Frankie Cosmos or old school Angel Olsen. I recommend listening to Heart of Hearts to figure out whether this album is one for you.

You can come cry with Elyssa from 2 to 4 PM on Mondays as she hosts Anxiety Hours on WPTS Radio. This review was edited by Dustin Butoryak of the WPTS Editorial Board.