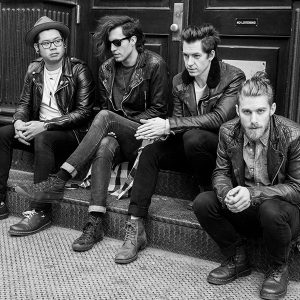 Young Rising Sons is a four piece pop rock band from New Jersey. It is made up of Andy Tongren (lead singer/guitar), Julian Dimagiba (bass), Max Dean (guitar), and Steve Patrick (drums). They formed in 2010 when Dimagiba and Patrick saw Tongren perform in a dive bar and asked him to have a jam session with them. They felt a surreal sort of chemistry that caused them to instantly click as friends and as bandmates. The group has yet to release an album, but have multiple EPs and singles. They have performed with a variety of artists including Halsey, The 1975, and The Neighbourhood, which helped expose them to more fans. The group has a sense of brotherhood about them, and the family aspect does not end where the team does. They surpass fans exceptions, which can help one understand why a small band has such a tenacious following. While getting ready to perform at a 21+ venue, the band went out into the lot and played an acoustic set for their underage fans and then stuck around to meet, take pictures with, and talk to the people who were unable to get into the show due to their age. Tongren relates this to the fact that they were best friends before they were band mates and believes that the band stayed together through hard times due to the faith they had in each other.

They came to Pittsburgh on October 21st where they played at the Hard Rock Cafe, located in Station Square. It was a strange venue to see such a high energy band. The place that would have been considered the “floor” at a standard venue was littered with tables and chairs where people were eating. There were also people sitting in wings of the room, which is where I was, and at the bar. The concert opened up with Milly, but their set was underwhelming due to the awkward set up. However, the second act, Saint Slumber, encouraged those on the floor to move the tables to the side and start dancing, which they did wholeheartedly. The vibe of the venue felt much better after that. Once Young Rising Sons took to the stage, everyone had vacated their seat and moved to the floor. Though there were not very many people there, the concert was still high energy.

Throughout the show, the band pulled many stunts. First, they played a cover of “All Star” by Smash Mouth, which got everyone laughing and dancing. Next, a crew member brought an Insomnia cookie cake lit up with candles on stage to celebrate Dimagiba’s birthday. The audience sang to him as he blew out the candles. At one point, Tongren jumped off the stage and made his way into the center of the crowd where we all sang together. They interacted with their audience and made the show very fan oriented. As we were looking up the bus route to get back to campus, the band came out again and took pictures with everyone that was still there. They seemed genuinely excited and interested when talking to their fans and made sure everyone had a good experience.

Their songs invoke an emotional response and show the silver lining of bad situations. For example, “High,” one of their more popular tunes, is about how the band had been going through “lows” for such a long time that when they finally got to the “highs” the rewarding feeling that came with it was just that much more meaningful. “Red and Gold” hits home with their young fan base, as it is about the hunger one feels when they know what they want and having to pave their own way in order to accomplish their dreams. When this song played in the set, everyone responded with even more enthusiasm. Closing the show, they played “Fucked Up,” which is my favorite song by them. Next time they come to town, I hope they are able to play a more concert friendly venue. Regardless of the initial strangeness of the location, Young Rising Sons still put on a great show. They recently dropped two singles, “SAD (Clap Your Hands),” and “Scatterbrain,” the former of which has a music video. “SAD” also shows the band’s connection to their fans as it involves fan participation during the chorus. I believe the future is bright for this band and I am excited to see where it takes them.