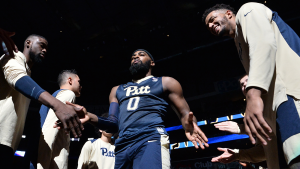 It is quite interesting how, in a matter of weeks, the morale of a basketball program can shift from the lowest it has ever been to perhaps its highest level in recent history. For Pitt Men’s Basketball, a winless conference season and an 8-24 overall record has led to the most excitement that has surrounded the team since their move to the ACC in 2013. After the termination of Kevin Stallings, the program’s 19-day coaching search felt as if it would never end. On the morning of March 27th, 2018, however, Heather Lyke and her staff made perhaps the most popular hire in the program’s history. Pitt’s new Head Men’s Basketball Coach, Jeff Capel, has embraced the city, the university community, and what is now his team in the months since his hire. On the basis of the roster he has created, support he has drawn, and relationships he has formed within the Pitt basketball family, it is safe to say that Pitt seems to have struck the lottery with Capel. But what does this Pitt team bring to the table in his first year, and what will be the product of this excitement? Here is what you can expect for the upcoming Pitt Men’s Basketball season.

When Jeff Capel took the Pitt job, he was fully aware of the roster dilemma he would surely face. This became a reality soon after he accepted the position, as two of the program’s most talented freshmen, Marcus Carr and Parker Stewart, along with 5th-year senior forward Ryan Luther, decided to transfer. Despite losing the team’s presumed leader in Luther, Capel was able to retain all of Pitt’s other frontcourt players from last season, including forwards Kene Chukwuka, Terrell Brown, Samson George, and Peace Ilegomah. Walk-on guards Anthony Starzynski and Joe Mascaro were welcomed back as well. The majority of the team’s talent and experience, however, will come from returners on the wing. Capel was able to retain key players such as senior leading scorer Jared Wilson-Frame, sophomores Shamiel Stevenson and Khameron Davis, and St. John’s transfer Malik Ellison, who sat out last season. With just two official visits at his disposal, five scholarships to fill, and an extremely late start recruiting, Jeff Capel had no choice but to get straight to work.

It is hard to predict which five Panthers will start against Youngstown State on November 6th. The starting lineup will presumably feature a core of junior captain Malik Ellison and senior Jared Wilson-Frame on the wings. From there, there are many possibilities. Although Pitt lacks a true power forward, their overall length could enable them to play somewhat positionless basketball. Stevenson has the skills to act as a stretch power forward, due to not only his 6’6”, 245 pound frame, but also his ability to rebound and finish at the rim. 6’3” freshman point guard Xavier Johnson appears to be in the lead for the starting position, but it is almost certain that both McGowens and N’Dir will see quality minutes orchestrating the offense. My personal prediction for the starting five would feature Johnson, Wilson-Frame, Ellison, Stevenson, and Chukwuka, but I would not be surprised if players such as McGowens, Davis, or Brown find themselves in the starting lineup as well. The strength of this Pitt team will be on the wings. There is a plethora of backcourt talent on the roster; add in a few quality big men, and Pitt finds themselves in a good position to compete with ACC opponents this season.

Beginning with Pitt’s non-conference opponents, the Panthers should come into ACC play with a strong overall record. This year’s non-conference schedule is probably the weakest in recent memory. Don’t be surprised if some of the mid-major games are a bit closer than they should be, as Pitt always tends to hit road bumps against inferior opponents, but these games should all go to the win column. There are four games to highlight here: St. Louis, Iowa, Duquesne, and West Virginia. With none of these being home games, it is hard to predict their outcomes. I expect Pitt to win against Duquesne in their annual clash, and also win their Big 10 Challenge matchup at Iowa. I predict they will fall to both St. Louis and West Virginia and enter conference play at 11-2. It would not be even slightly surprising to me if the non-conference record is as low as 10-3, but anything below this would be extremely concerning.

When it comes to their conference schedule, there are many winnable games for the Panthers, especially in a weakened ACC. Pitt gained a good amount of experience, while tournament teams such as NC State and Miami lost their cores and have fallen off. However, playing under a new coach, losing their primary ball handlers from last season, and still attempting to build team chemistry, it is hard to place the Panthers anywhere outside of the bottom three spots in the conference.  A reasonable prediction for the conference record could range anywhere from 3-15 to 5-13. It is highly unlikely that Pitt will get six conference wins this season, but it is just as unlikely that they’ll win less than three. My prediction is set at 4-14, with wins over Wake Forest and Georgia Tech on the road, as well as Syracuse and NC State at the Petersen Events Center. However, it is highly possible that Pitt can lose some of those matchups, and it is highly possible that they can win some others. Those expecting a magical run in the conference may be disappointed. But those who can examine this season objectively, and realistically gauge the success of a team that went winless in the ACC just last year, should find themselves ecstatic about the program’s future.

Jeff Capel has energized the Pitt basketball program and fanbase. He is a figure that people can trust and support as he experiences the struggles of building a basketball program, a figure that Kevin Stallings was not. Pitt will likely finish in the bottom three of the ACC this year. They may finish with a losing record. I see the Panthers going 15-16 this season, but slight variation would not shock me. Needless to say, Pitt basketball is moving in the right direction. If they finish anywhere around this record, everyone connected to this basketball program should be optimistic for the future. Recruiting is looking amazing for next season and beyond, as Capel is truly cementing himself as perhaps the best recruiter in the country. As a freshman student, I think it is completely plausible that I will witness an NCAA tournament appearance at some point in my undergraduate years here. On November 6th, 2018, overall attendance will improve, the Oakland Zoo will be rocking once again, and Pitt basketball will officially commence the, as the community has deemed it, “Zoo Era”. The Jeff Capel era will soon begin, and I, for the first time in far too long, cannot wait for Pittsburgh Panthers basketball.