#ZooEra Effect on the Oakland Zoo 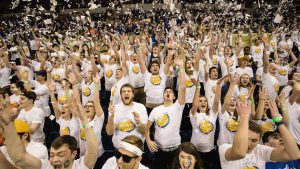 The Pitt Panthers are in the middle of their men’s college basketball season, currently sitting at 9-3. The season has had a different feeling so far.  There’s optimism, excitement, and an overall buzz around the Panthers. The catchphrase used to coin this season is #ZooEra, and it truly does feel like we are in a new era when it comes to Pitt men’s basketball. Growing up, the University of Pittsburgh’s Oakland Zoo was known as a top student section with Duke’s “Cameron Crazies,” Michigan State’s ”Izzone,” and the student sections of Indiana, Kentucky, and Kansas. But during the past couple of years, it’s been a struggle to really pack the Peterson Events Center, while these other schools were selling out their exhibition and non-conference games. Athletic Director Heather Lyke saw something was wrong and decided to change it. She fired head coach Kevin Stallings after only two seasons. After many interviews, Lyke decided to hire the Panthers’ new head coach Jeff Capel, formerly an assistant coach at Duke.

Jeff Capel, known for being a great recruiter, flexed some of his recruiting muscles in the offseason by acquiring Trey McGowens and Au’Diese Toney who were both 4 stars, and Xavier Johnson and Curtis Aiken who were 3 stars. Capel was able to do this without having a full recruiting period, and that excited many Pitt fans. So far, it does certainly feel like a #ZooEra for the Panthers, as the players that Capel recruited lead the team in almost every category statistically. It’s very exciting to be a Panther fan right now because you feel that change. You saw it on national television as a young Pitt team took a ranked Iowa team to the last buzzer, and when all seemed lost against rivals West Virginia, they were able to close the lead late in the second half. Although those games didn’t end in victories, it gave fans hope that this team isn’t going to quit, unlike last season when it looked like the Panthers did so many times. Capel has brought a culture change, which is something the Zoo can get behind. This seems to be the right recipe for success, but will that bring the Zoo back?

Personally, I believe it will.  We’ve seen examples this season of what success can do for crowd attendance. The Panthers volleyball team had a great season, and we saw attendance increase game by game. The football team struggled early in the season, but was able to win once conference games started, and by the time the Virginia Tech game came around, the student section was packed cheering on the team. Continued success will bring the fans back and in a big way. The Panthers start their conference schedule on January 5th against North Carolina. Attendance will not be great due to the fact that many students won’t be back from winter break. The real barometer will be on January 9th against Louisville. Even if attendance isn’t great, with what Capel has done in such little time, in 2-3 years I am almost positive the Oakland Zoo will get back to a place where it will be nationally known as one of the most rowdy crowds in the country.